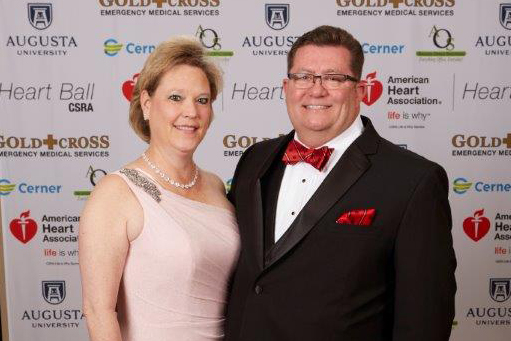 On July 15, 2002, Anna Vincent put her newborn and two-year-old sons down for a nap and let out a sigh of relief. Not only did she have this parenting thing down, but she was also getting the hang of being a mother of two, just nine days after giving birth to her second child, Connor, who’s now 15.

But then she felt a throbbing pain in her arm and chest – two telltale signs of a heart attack … except it was in her right arm and not her left. Vincent’s mind bounced back and forth between concern and denial regarding what she was experiencing.

Her mother, who was with her at the time, hurriedly called 9-1-1. Upon arrival to her then-local hospital’s emergency room, the staff dismissed her heart-attack symptoms for a postpartum panic attack. But within two minutes of conducting an electrocardiogram, 20 people in scrubs suddenly surrounded her.

“Mrs. Vincent, you’re having a heart attack,” a nurse said.

“What? You mean I had one?” Vincent confusedly asked.

“No, you’re having one right now,” the nurse said.

“I call myself the one-in-a-million girl,” Vincent said. “I’m an otherwise healthy woman with no family history of heart disease who experienced a heart attack. And nine days earlier, there were two knots in Connor’s umbilical cord, and it was wrapped around his neck.”

Looking back on her cardiac event, Vincent said she didn’t feel scared.

“I didn’t think it was that bad until I was going in for the cardiac catheterization,” she said. “I saw my husband, Shawn, and he was crying. That’s when I thought, ‘This isn’t good.'”

Vincent was then admitted to the cardiac intensive care unit, where she remained for three weeks.

“At one point during my stay, Shawn brought in Connor,” Vincent said. “I’ll never forget how I felt as I struggled to hold him. The doctor then told me that I’d need a nanny all my life and that I’d never walk around Disney World.”

But Vincent had other plans.

“That didn’t work for me,” she said. “I decided to prove everyone wrong and enjoy this time in my children’s lives.”

When Patrick, Vincent’s oldest son, who’s now 18 years old, was 4 and Connor was 2, the Vincent family traveled to Disney World.

Vincent had been feeling well for about 14 years, until she suddenly began experiencing speech and memory problems.

“I was on a maintenance plan but wasn’t seeking care at an academic health center, which keeps up with the latest advances in medicine,” Vincent said.

“Dr. Javaheri couldn’t believe how well I was functioning,” Vincent said, “but within six months, he had me all fixed up with new medication. If I was experiencing something that Dr. Javaheri didn’t understand, he would keep looking, and he’d figure it out. He never gave up on me.

“He explained things that no one had ever told me before, and now I’m fully educated about what happened to me. I never realized how empowering that would feel. I finally had answers to the questions I had been asking for 15 years.”

For Vincent, the physical healing came faster than the psychological healing.

“It was a very dark time for me,” Vincent said. “While others were telling me to focus on all I had going for me, Dr. Javaheri validated everything I was feeling. Depression is very common for heart attack victims, so I’d like to see the mental health aspect of cardiac care improve.”

Despite the challenges that Vincent faced with her health, she learned a lot and maintained a positive outlook.

“Heart disease isn’t what we think it is,” she said. “There are people here who can help you. I don’t think that my health would’ve gotten better in the long run if it didn’t get so bad that I’d have to come to an academic health center,” Vincent said.

Vincent, who has spent the past 18 years caring for her children, is entering the phase in life when she’s preparing to send her kids off to college. She looks forward to doing more of what she loves: cooking, watercolor painting, genealogy and traveling with Shawn – her friend since the fifth grade, first boyfriend and husband of 18 years.

“Mentally and physically, I feel the best I’ve ever felt,” Vincent said. “I’m at the top of my game.”