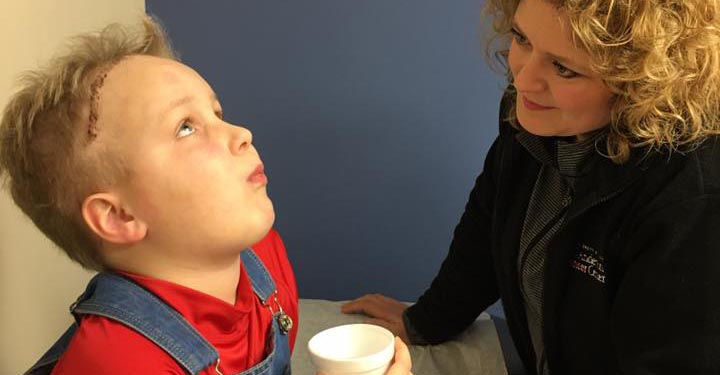 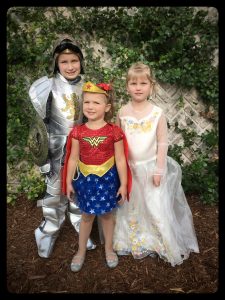 As a knight in shining armor fending off his princess sister’s kisses, Coulter Hnatt might look like a typical 8-year-old (well, on Halloween anyway), but his story is extraordinary. His numbers tell the tale: 4 and ½ years battling cancer, enduring countless tests, numerous needle pokes, and many surgeries, radiation therapies, chemotherapies, sedations, and more holidays in hospital beds and medical facilities than any child – or adult –could possibly withstand.

Coulter’s fight began when he was 4 years old and doctors discovered a brain tumor near his brainstem. Surgeons at Texas Children’s Hospital removed the entire tumor and then began the first round of radiation to help keep it from growing back: 33 proton therapy treatments at the MD Anderson Cancer Center in Houston. One year later, the cancer reoccurred. Despite additional treatment over the years from the nation’s finest cancer centers, to also include St. Jude Children’s Research Hospital, the cancer continues to return – bigger and badder than ever.

“It (the cancer) has come back every year,” says Mike Hnatt, Coulter’s father. “And it comes back worse and spreads and it has spread into the spine.”  He adds, “We have been no stranger to bad news. It feels like 8 out of 10 times each MRI he has done every month is a mixed bag or negative.”

“But he keeps on prevailing,” says Courtney Hnatt of her son, Coulter. “He really is amazing.” She adds, “We had doctors actually turn from ‘why don’t you take him home for a couple of months because this is it,’ to, ‘wow, I can’t believe how good he is doing.'”

October of 2015 was one of the dark periods. The Hnatts were living in Houston, Texas with Coulter and his younger sisters, Audrey, 5, and Codey 4. Coulter’s spinal tumor was back and they needed to find new answers. Just as she had done successfully in the past, Courtney turned to the Internet and its network of cancer parent forums and posting of clinical trials. She had been following Dr. Ted Johnson at the Georgia Cancer Center at Augusta University in Augusta, GA and his upcoming Indoximod pediatric immunotherapy clinical trial for the last six months. It was time to make contact.

“We were out of all options,” remembers Courtney. “This was our only hope.”

After meeting with Dr. Johnson, the Hnatts were convinced by his sincerity and Coulter became the first person enrolled. On December 9, 2015, Coulter swallowed the Indoximod pill on the first day it was available as part of the pediatric immunotherapy clinical trial.

For nearly a year now, the Hnatt family have lived in the Ronald McDonald House just steps away from the Children’s Hospital of Georgia at Augusta University where Coulter receives his comprehensive treatment, which includes chemotherapy and daily physical therapy. He also received gamma knife radiation at Augusta University Medical Center, and recently returned to Texas Children’s Hospital for a course of radiation therapy. They couldn’t be happier with their decision to come to Augusta.

“Dr. Johnson gave us the time we needed when so many doctors are in a rush, “says Mike. “He continues today to spend every minute not in a hurry. He is there listening to us, talking, explaining everything as if he’s got tons of energy and patience.”

“And then on top of that we have this phenomenal take-home,” adds Courtney. “The end result is Coulter is better today than he was 11 months ago. His quality of life is better.”

Both Courtney and Mike describe Coulter’s “full capabilities” that he actively engaged during a family vacation in Wyoming this summer. “He was out there kayaking, horseback riding, whitewater rafting, doing ropes and challenge courses, and zip-lining amongst the grizzly bears.” Adds Mike, “He is not in any pain at all.”

The Hnatts are quick to point out, however, that Coulter is not out of the woods and Dr. Johnson doesn’t “powder puff things.” In fact, because Coulter’s cancer was “outsmarting” the original chemotherapy, Coulter is now beginning a new kind of chemotherapy with the same immunotherapy treatment, a regimen that required Dr. Johnson to seek additional FDA approval (and internal IRB approval). The Hnatts appreciated and understood the work required to extend this arm of the clinical trial.

“We have chosen to stay here because Dr. Johnson has been so attentive to Coulter’s needs,” says Courtney. “He is here for the patient.”

Our goal is to “Never Say No” to children with cancers that have defied standard treatments.

At the Georgia Cancer Center, we are striving to offer a complete array of clinical trials to families looking for immunotherapy options for their child with relapsed cancer. And, as some of the world leaders in helping the immune system control cancer in children, who better to lead the way?