When Jessi Chambers was 16 weeks pregnant with her son Bearett, he was diagnosed with CDH- Congenital Diaphragmatic Hernia. A birth defect where the diaphragm doesn’t form properly letting organs go into the chest cavity and not allowing the lungs to grow. 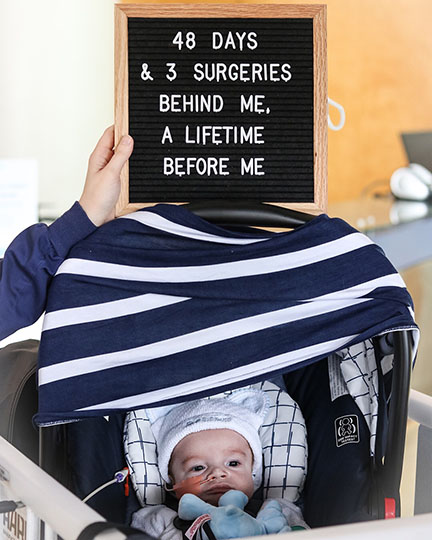 His diagnosis was devastating and his family felt hopeless. Jessi knew she had to deliver at a hospital that was experienced with CDH and offered ECMO. It was an easy choice when Jessi met with the Children’s Hospital of Georgia pediatric surgery team and they were the first doctors to ever call him by his name, Bearett.

The NICU team was involved right from the start, even before delivery. Bearett went on ECMO at 5 hours old and spent 15 days on, and had his repair surgery while on ECMO. He spent another week intubated and finally came home 48 days later.

“Everyone here is phenomenal,” Jessi says. “They treated us like family and made even the darkest days bearable. They loved my son like their own.”

If it was not for them and Dr. Pipkin, Bearett would not be here. Jessi truly believes the Children’s Hospital of Georgia is the best of the best and wouldn’t have wanted him to be anywhere else.