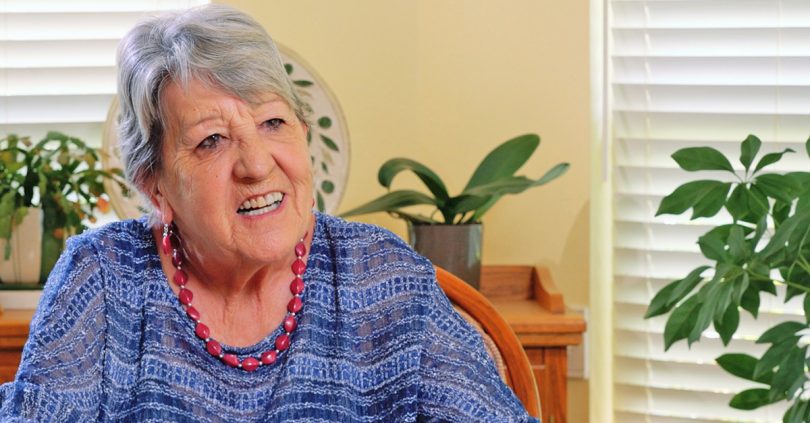 Thirty percent of people with a brain aneurysm don’t even make to a hospital. Of those who do, another third dies during surgery or at the hospital. Another third lives the rest of their lives with a permanent disability, possibly in a nursing home. Then there are the lucky ones: the 30 percent who go home and get a second chance at life.

“Everyone keeps telling me I’m a walking miracle,” said Johanna Crump, who survived not one, but two aneurysms this past September.

Dr. Scott Rahimi, a neurosurgeon at Augusta University Health, would agree. Crump is like so many of his patients—in her 60s, in general good health. When an aneurysm strikes, it’s sudden and completely unexpected.

Johanna said that for her, it happened on an everyday Thursday. She’d just come home from dinner out with “the girls,” and was puttering around at home with her beagle mix, Libby. Suddenly, she had a terrible headache. “And I’m not one to have migraines,” she said.

She also isn’t one to call up her son for just anything. But she called Mark to let him know, and he immediately drove over to take her to a local hospital. They waited for more than two hours, with Johanna shivering and still feeling like her head was about to split open. Mark finally insisted: “There is something wrong. Someone needs to see her now.”

It was just in time. Tests showed bleeding—a lot of it—in Johanna’s brain.

From there, it was a quick transfer to Augusta University Health. Local and regional hospitals typically send patients with aneurysm and stroke to AU Health, the region’s only hospital with the technology and expertise to treat these two dangerous conditions.

A CAT scan and a CT angiogram found where the problem was exactly: Two aneurysms, one larger than the other, in the anterior inferior cerebellar artery, right at the back of Johanna’s head.

Johanna was immediately taken back for emergency surgery to help relieve the pressure from the bleeding. She knows now that her heart stopped while she was on the table, but ER staff were able to bring her back so that Rahimi could perform the lifesaving procedure to repair the aneurysms, placing metal coils inside the bulging artery to stop the bleeding and seal the leak.

It worked. Johanna was in the hospital, then inpatient rehab for nearly two months as she recovered. She doesn’t remember much about those days—just a few blurry flashes here and there. She knows that she could talk and walk, although she was weak and her balance was off. She knows that half of her head had to be shaved before surgery, and that Mark had a hairstylist come shape up his mother’s hair.

It’s only been a few months since she’s been home, but she’s slowly getting her life back. Waking up with Libby fills her with joy, as does getting back to her thrice-weekly games of pinochle. “I told my friends, ‘Nobody’s going to want to be my partner.’ But after we played five minutes, they said, ‘What’s your problem? You’re back to normal.’ So it keeps my brain going.”

For Rahimi, who saw Johanna for a recent followup visit, “It was phenomenal. Her aneurysm was completely gone. When you have a patient with a devastating subarachnoid aneurysm, when you see them in clinic once they’ve made a recovery, they’re like a different person. She looked incredible.”

Johanna’s journey isn’t quite over. She’s also been diagnosed with an arteriovenous malformation, an abnormal tangle of blood vessels in the back of her brain, which will require surgery down the road. “Life’s not perfect,” she said. “But I’m so happy to be able to function the way I do.”

She gives Rahimi credit for that. “I love the man,” she said. “From what I hear, the odds that I had and what the doctor told my sons was going on with me—my outlook, it was grim. Very, very grim. If it weren’t for him, I don’t think I’d be sitting here. I’m convinced he saved my life.”

To make an appointment and learn about our services and providers, call us at 706-721-4581 or visit augustahealth.org/neuro.

We invite you to join in AU’s Inaugural day of giving, Augusta Gives, on October 20th, 2020. Your gift makes AU stronger for our #1 priority – our students and our patients – allowing them to learn and be cared for by the very best at our renowned institution.