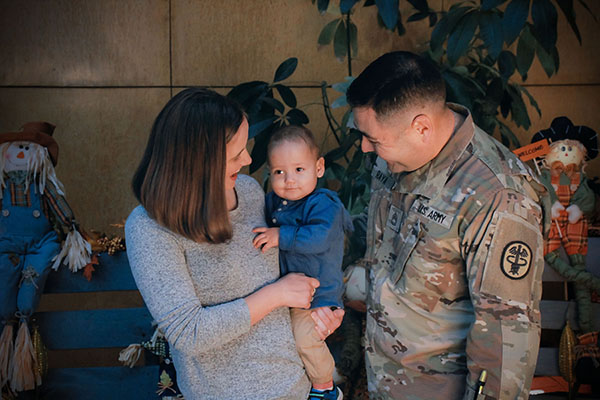 Every day, 175 babies around the world are born with craniosynostosis.

Sally, a nurse, had a textbook pregnancy. “Everything was completely normal, with no complications,” she said.

For the first three weeks, the new baby was loved and snuggled by Sally, husband Stephen, a radiology technician at Eisenhower Hospital on Fort Gordon, and sister Addison, 8.

When he was just a few days old, Sawyer saw his pediatrician. And that’s when his doctor noticed it: a ridge on Sawyer’s tiny head. And instead of growing all the way around, it was growing front to back. “Looking from a bird’s-eye view at the top of his head, you could tell that it was boat-shaped,” said Sally.

It was hardly noticeable, but it was there: craniosynostosis.

“I’d never heard of it,” said Sally. But she googled it: “And I scared myself to death.”

All of us are born with a skull that’s made up of amount seven bony plates. When we’re babies, the plates are held together by cranial sutures or joints, which are flexible tissues that usually stay soft until around age 2. This not only helps babies pass more easily through the birth canal but also gives babies’ fast-growing brains room to grow.

At around age 2, the joints fuse, becoming the hard skull that we have as adults.

In babies like Sawyer, one or more of the sutures fuse too early, even as the brain is still growing. In complex cases, especially where children have a genetic abnormality that’s related to craniosynostosis, there can be increased pressure on the brain, which can lead to developmental delays and cognitive problems, or worse. “I didn’t know what his life would be like,” said Sally.

Fortunately, Sawyer had the most common form of craniosynostosis, a fusion of the sagittal suture, which runs from front to back along the top of the head. Even better, it was found very early. His pediatrician immediately recommended that Sawyer see pediatric neurosurgeon Dr. Ian Heger and pediatric plastic and Dr. Jack Yu, a craniofacial surgeon at the Children’s Hospital of Georgia.

When Addison heard that her little brother would need surgery, she looked at her mother with her big brown eyes, tears rolling down her face. “She kept asking why he needed it,” said Sally. Then, speaking as only a big sister could, Addison said, “I would do it for him if I could, I would take his place.”

The good news was that Sawyer would benefit from a new product in the craniosynostosis repair procedure. The endoscopic procedure typically takes place when a baby is between four to six months old, so the family waited until Sawyer was five months. Sally and Stephen said goodbye to their tiny son in the preop area, holding it in so that Sawyer wouldn’t get upset.

Then life suddenly was normal again, aside from a few stitches in Sawyer’s head and a haircut “that made him look like Bill Murray,” said Sally, laughing.

But at Sawyer’s follow-up visit, Dr. Yu found that one of the back springs had not deployed correctly, something the physicians hadn’t seen happen before. By sheer coincidence, he was attending a conference soon after, where he presented Sawyer’s case. Other physicians had seen a similar issue, and Dr. Yu returned with a definitive treatment plan, which included remolding and reshaping the back of Sawyer’s head during the second surgery to remove the springs. “These kinds of actions cemented our trust in him,” said Sally. “I always could call or email him at a moment’s notice to ask every question I could think of.” 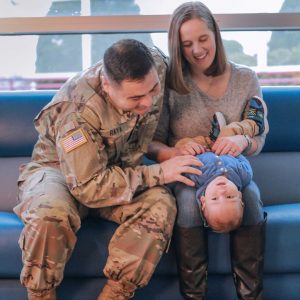 As for Sawyer, having two surgeries before he turned one was just something the baby took in stride.

“He is a feisty guy,” said Sally with a smile. “Our first daughter was a dream baby, she was easy, always slept at night, and we definitely got the opposite with Sawyer. He’s always on the go, he doesn’t want to be held. It’s almost like he has something to prove. He’s very fearless.”

True, trying to keep a fast-moving toddler from falling and bumping his head—or his stitches—caused a few cries of alarm along the way. But Sawyer’s surgery and recovery were everything Sally and Stephen could have hoped for. “All the really bad things that could happen, luckily for whatever reason this condition affected him, he still meets all his milestones and is growing like he should,” said Sally. “He just had a funny-shaped head.”

Sally is also thankful that Stephen was transferred to Fort Gordon in July 2017, when Sally was six months pregnant. It put them in the right place at the right time for Sawyer to be seen by a children’s hospital with specialists like Dr. Yu and others who specialize in just what Sawyer had. “I’m a member of a group on Facebook for this condition, and so many parents say they have to fly or drive hours for care. That’s the last thing you want to do with a baby. We always talk about how that had to be the reason things lined up. We are really, really lucky.”