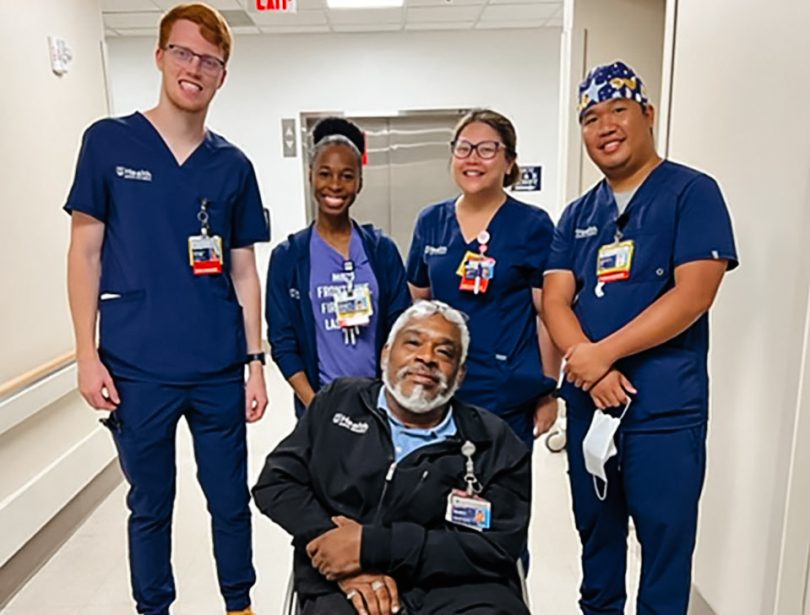 When Darrell Stone woke up, he didn’t know what day it was or how long he’d been in Augusta University Health’s Intensive Care Unit.

All he knew was he had a brand new beard, and his doctors were talking about Thanksgiving.

“Everything was a blur,” said Stone.

Stone was diagnosed with Covid-19 on Oct. 23. When he found out, he tried to get an infusion of monoclonal antibodies, but doctors said at that time his oxygen levels were too low.

The next day the 21-year MRI Radiology Registration Specialist at AU Health was back in the hospital, but not at his regular post. This time, he was intubated and put in a medically induced coma.

“It was bad, it was definitely serious and I don’t take it for granted,” said Stone.

Stone stayed in the MICU for almost two months. His nurses say he was one of many patients admitted to the ICU during one of the final surges of the pandemic.

He was in and out of consciousness for most of that time, not knowing where he was or how his body was holding up.

Stone, who has been in a wheelchair since he was six years old due to a car accident, knew he was at a higher risk to see stronger symptoms of the virus. His nurses looked on, knowing one of their own was fighting for his life.

“I can remember he had a corner room, he was on a wheelchair, and we were told he was an AU Health employee,” says Jaymark Lambino, charge nurse in AU Health’s MICU

Stone would stay in the MICU for two months. Lambino and other nurses on the 4th floor of the hospital’s main building say his road to recovery would be hard, like many other patients they’ve seen come into the ICU.

It would be months until he was strong enough to go to work, and still feels the effects of hospitalization to this day.

“I lost all my strength. Before, I was very independent, now I’m more dependent,” said Stone. “It’s tough, but it’s gotten much, much better.”

Then on June 6, he decided to make a trip to the fourth floor of AU Health, back to where he spent two long months, to thank the staff for their dedication towards his care.

Stone said working in a hospital, you grow accustomed to seeing people pass away. The ones who get better eventually leave the hospital, but the nurses who care for them never get to see them again.

He wanted to change that.

“The ones that took care of me that remembered me they said, ‘I’m so glad to see you!'” said Stone.

“I saw him and he looked at the board and I said, ‘What do you need, sir?’, because he was wearing a jacket. Then he said I was here before,” said Lambino.

The nurses who see patient after patient come in and out, with little knowledge of what happens once they leave the unit, were appreciative of Stone’s surprise visit.

“It puts a lot of wind in our sails,” says Micheal Ingalls, an AU Health charge nurse. “There are a lot of times when you know we’re very demoralized with all our hard efforts and, despite it, watching people expire. Even a picture was good news for us.”

Stone says he’s not fully recovered yet, but he’s getting there. He’s just happy to be able to work with the best, and has a new appreciation to his work and the care of others.

“It’s an extended family. I spend so much time here and so many years, but I’m in the best care,” said Stone. “I never take anything for granted, and feel I can relate more to patients and they realize we’re human too.”