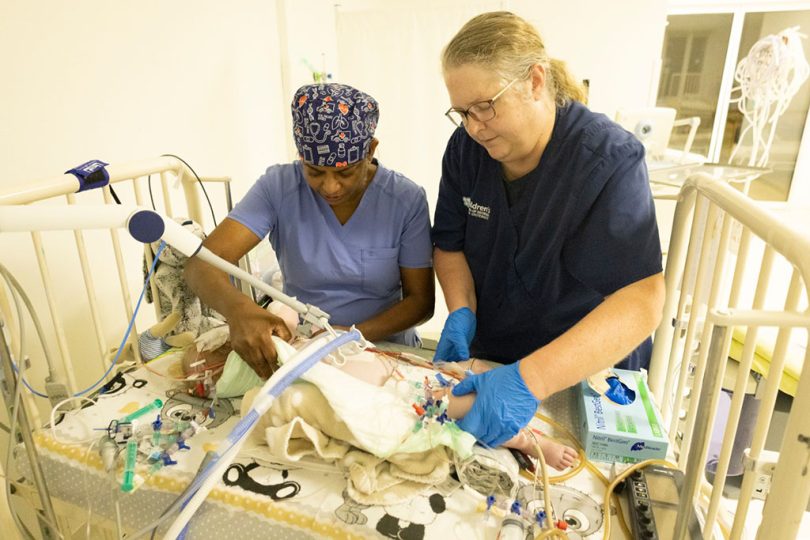 Sara Elizabeth Curry sits at a table near the main entrance of Augusta University Health. She has a tumbler filled with soda to her side and a bandana keeping her hair back, and is taking a brief break before she heads back to work.

Liz or ‘Lizard’ is on hour 38 of a 48 hour shift. Most call that a crazy shift, Liz calls Friday.

If you ask her, she wouldn’t change it. She went to school to be a nurse, and still loves it. Her 30+ years of experience working transports, primarily neonatal and pediatric with experience in NICU and ECMO (Extracorporeal Membrane Oxygenation), keep her busy.

All her experience led to one February night. She watched on TV as the death toll and fighting escalated in Ukraine and told herself she needed to do something to help out. Three months later, she was on her way west, to help cardiac patients in L’viv Ukraine.

“When the war started, I just felt so bad for the people,” said Curry. “I wanted to do something to help.”

Curry had been looking for a group to travel with since the Russia – Ukraine conflict began in late February. It wouldn’t be her first time in the country. In 2004 she went with a friend to help out and give supplies to staff. She remembers the Ukrainian people as appreciative, always hoping to give back.

That’s when she found a Facebook post being shared by the thousands. It was from Dr. Bill Novick, CEO and Medical Director of Novick Cardiac Alliance. He was asking for fearless nurses who would be heading to Ukraine in March for eight days. His travels to low and middle income countries to help children with cardiac disease. Curry put in an application for the trip, knowing it was a long shot, and wasn’t chosen. On May 1, she saw the group was going to Ukraine again, this time in June. She applied, knowing there was still a big chance she would not be selected. She heard back three days later that she’d been selected to go. 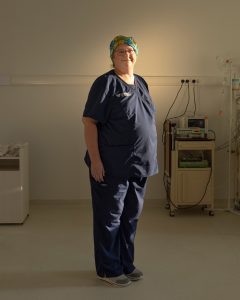 Liz Curry flew into Krakow, Poland before heading towards Ukraine. She would spend eight days in the country. Credit: Vivian Wan, @vwan415

“I still wasn’t convinced I really had enough post-op cardiac care to really be able to jump in, so I came in one day and watched the PICU,” said Curry. “I wanted to make sure I knew what to do, I’ve been around it enough that I felt like I probably knew it.”

Curry was one of 16 making the trip, including two film crew members who are shooting a documentary on Dr. Novick and his work overseas. The rest were healthcare workers from around the world. The group flew into Poland and drove to the Ukrainian border. Curry says right away, you could see the results of the war on the country.

“You start seeing the military vehicles and stuff running around with weapons, you see some areas are sandbagged,” said Curry.

Once they got through the Ukrainian border, the group were put to work. Through constant air sirens blaring off in the background, a common occurrence during their stay in L’viv, they saw a baby on ECMO who had a major surgery done a week before they got there. Curry went straight to the baby, helping the doctors provide care.

“I was planning on being there at night, that’s what I normally do is start out on the night shift,” said Curry. “They’re like, ‘No, you do ECMO, we need you here on days.”

These days were not easy. The group was dealing with a number of factors working against them, the most obvious being aging equipment and medicine. Curry says the hospital was using whatever equipment was donated to them, which often meant they were old and in a different language than English. The pumps the group used were all in German, meaning they had to read and convert change rates from a language none spoke.

Through all the challenges and long, grueling nights, the group operated on five kids and took care of two more who were already at the hospital.  Curry says the team of all different races and backgrounds jumped in to make a difference. Everyone knew their role and acted as if they’d been on the same staff for years.

“It was a really wonderful experience. I don’t know who benefitted more from us being there, them or us,” says Curry. “We all just love the people there, you just love being able to go there and help.”

Novick, who has taken over 500 trips to different third-world countries, says this was one of the best groups he’s ever seen, especially given the circumstances surrounding them.

“The group really worked well together,” said Novick. “I couldn’t remember a team that worked better together than that group. Protecting people across specialties, I mean it was a really, really good group.”

Novick specifically remembers the care Curry gave one child. He said the baby was on a ‘razor’s edge’, each hour an unknown, and each day a new problem they’d need to solve. Curry was attached to him, spending a majority of her time there trying to make him better.

Doctors said the child had a multidrug resistant gram negative bacteria that they could do little about, eventually leading to his death. Novick, who called the bacteria a ‘hideous monster’, said it was no fault of Curry, who gave it her absolute all to make sure the baby was cared for.

“Liz was the true champion for trying to pull this kid out of the black hole he was in, she gave it her all and really did great,” said Novick.

It was the trip of a lifetime, but Curry doesn’t see it that way. If the need is there and she’s able to go again, she wants too. Even if that means cancelling some future plans.

“They contacted me earlier this week that they’re possibly going back in September. That was when I was supposed to be going to the Grand Cayman and to Bristol for some NASCAR races,” said Curry. “If I’m going back to Ukraine, I’ll cancel both of those.”