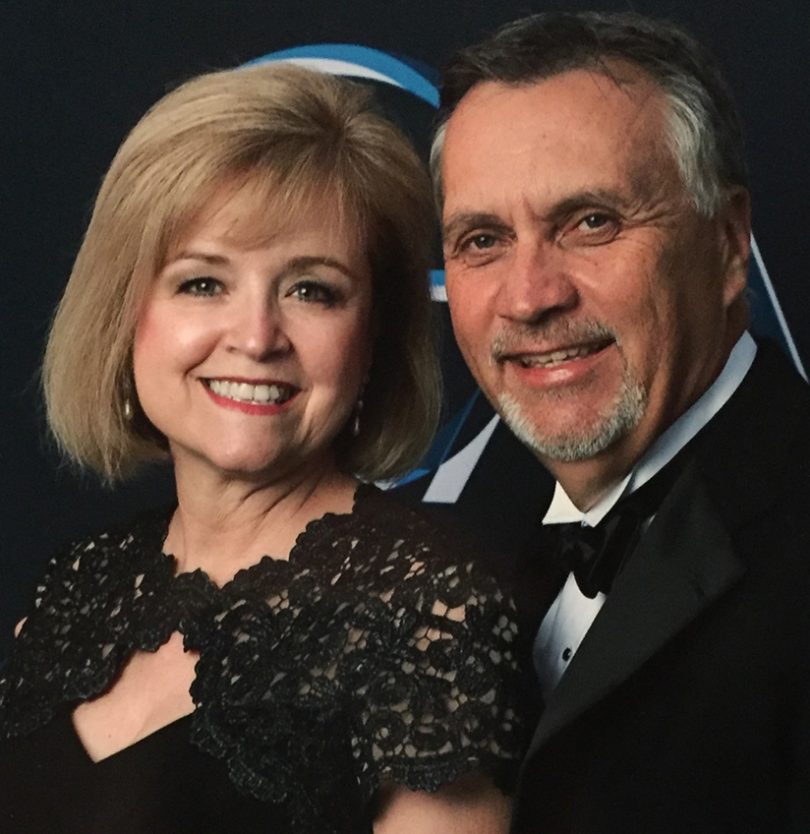 This Christmas will look a little different for Rev. Jeff Flowers.

In his role as Director of Spiritual Care, the holidays have always been a busy time of visiting patients, organizing or attending holiday events and services, working with members of the clergy in the Augusta community, and a host of other activities that support patients and hospital staff at Augusta University Health.

As he retires on Nov. 30, this year he and his wife, Tami, are looking forward to slowing down and enjoying the season with friends and family.

Flowers said he is looking forward to having “six Saturdays and a Sunday,” but it will be a big adjustment for a man who has worked steadily since he was 14 years old.

As a child, Flowers knew he wanted to be in the ministry. Growing up in a small-town church in the south, he always thought that meant he would pastor his own church. Toward that path, he attended Mars Hill University in North Carolina, where he had an internship at a Veterans Administration hospital and found he enjoyed working in a medical setting. Then he attended seminary in Fort Worth, Texas.

There, he learned about a Clinical Pastoral Education program at Baylor University. Similar to a medical student’s first year of residency, the program is a pathway to clinical work in a hospital as a chaplain.

“I did that and fell in love with it,” he said. “They asked me to do a second-year residency. From that point on, I thought, ‘Oh, I’d like to do this for a living’.”

After graduating, Flowers joined the chaplaincy staff at Baylor University Health System in Dallas, Texas. For the next 12 years, his career continued to accelerate as he managed pastoral programs at a couple of hospitals within the health system.

He was happy in his dream job, and comfortable. But he couldn’t shake the feeling that there was something else he was supposed to be doing. A short time later, he learned about an opening at the Medical College of Georgia, an academic medical center that cared for a lot of indigent patients. Instead of overseeing a department, he would be the hospital’s only chaplain. 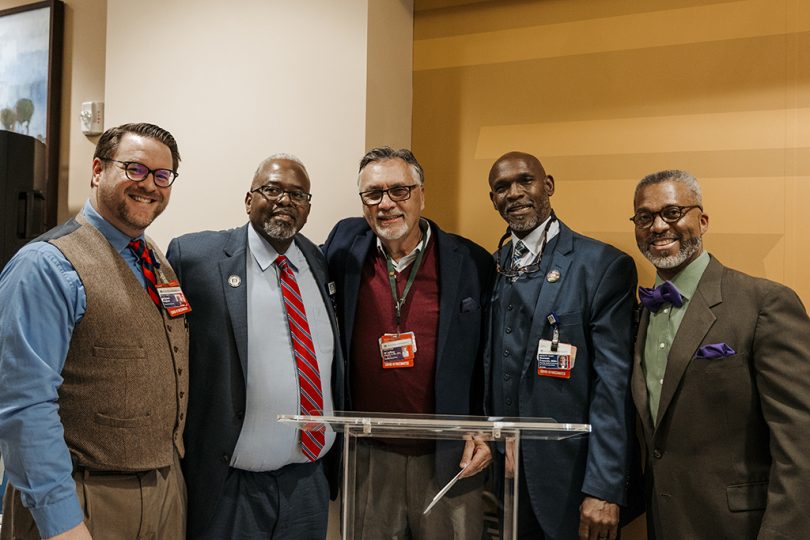 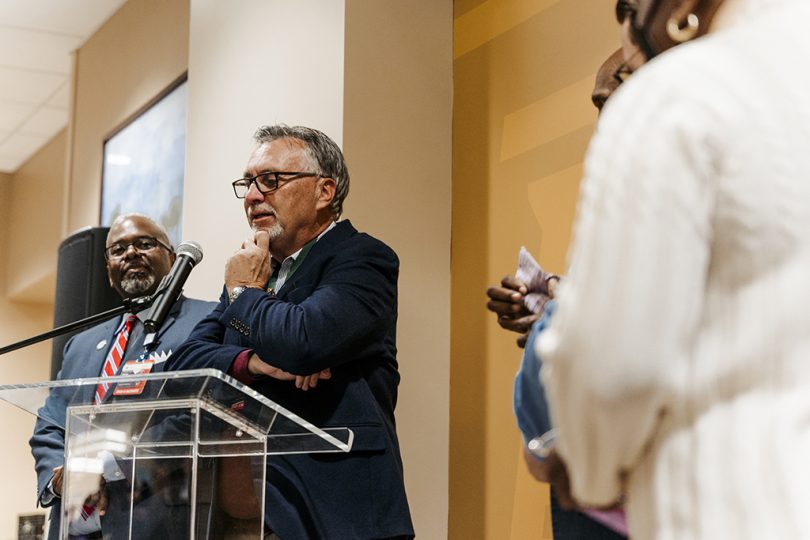 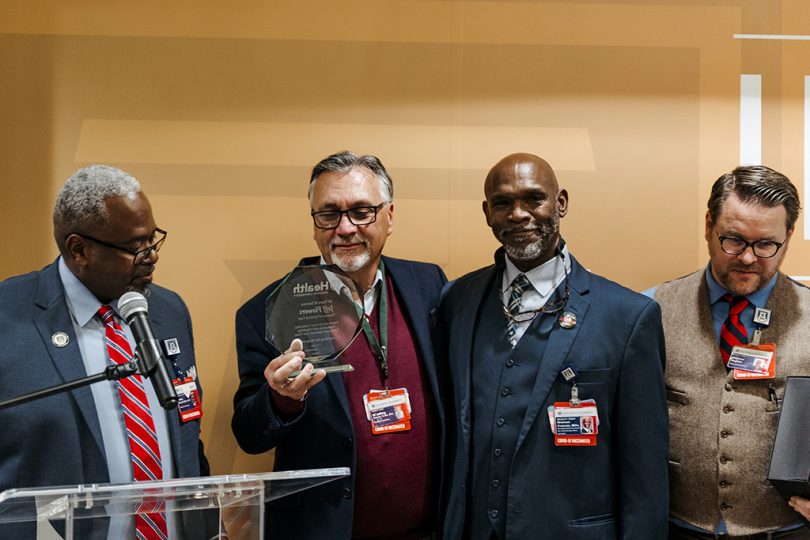 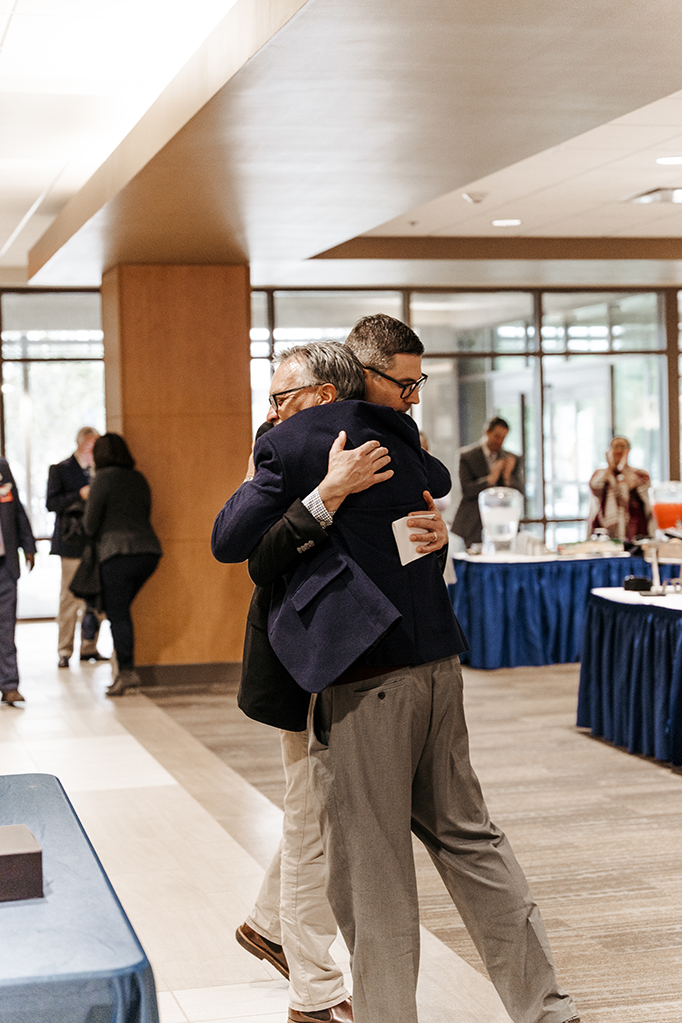 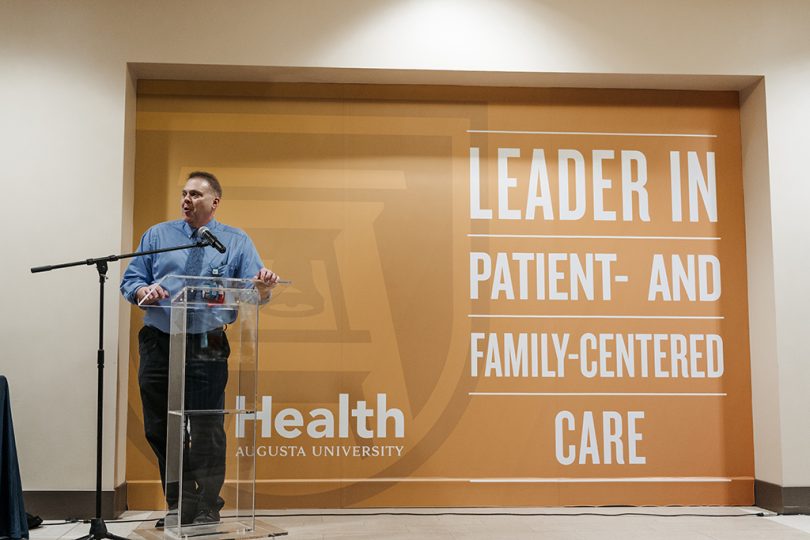 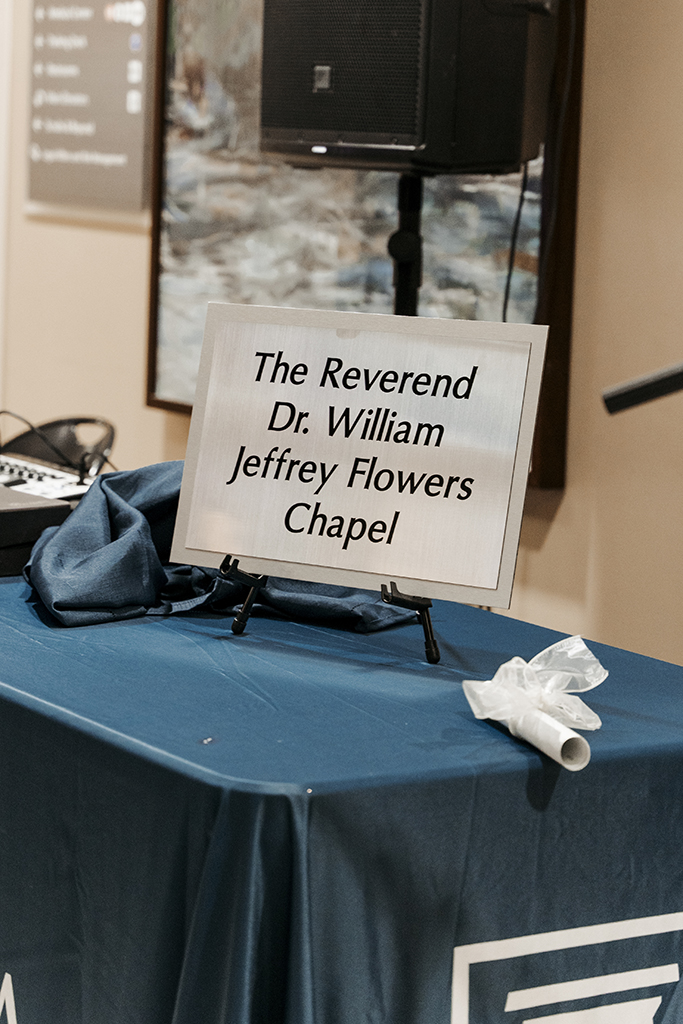 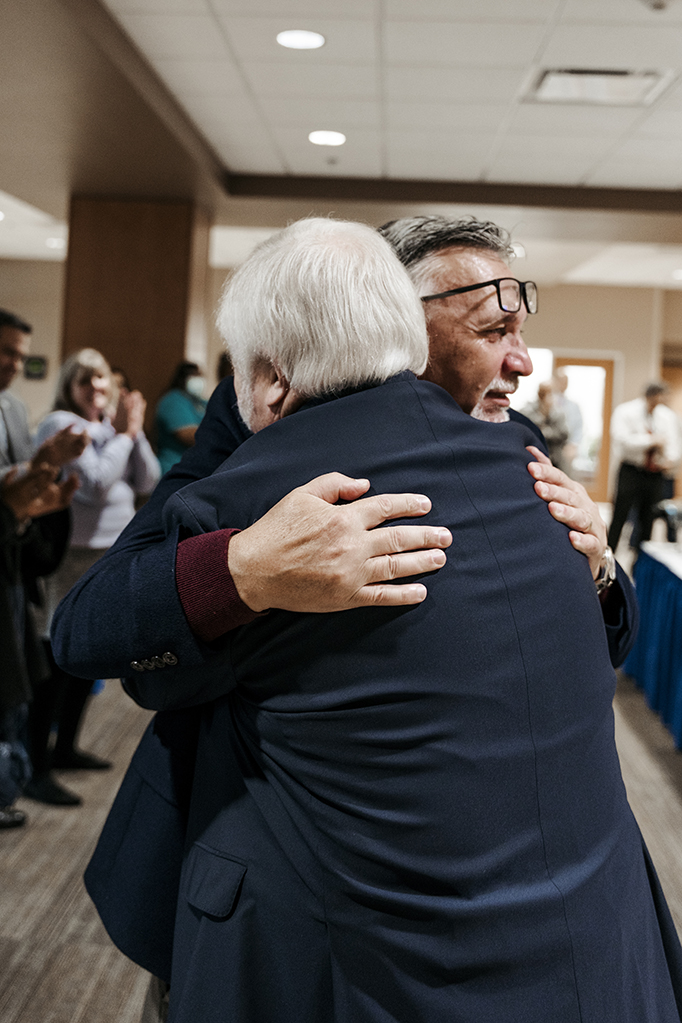 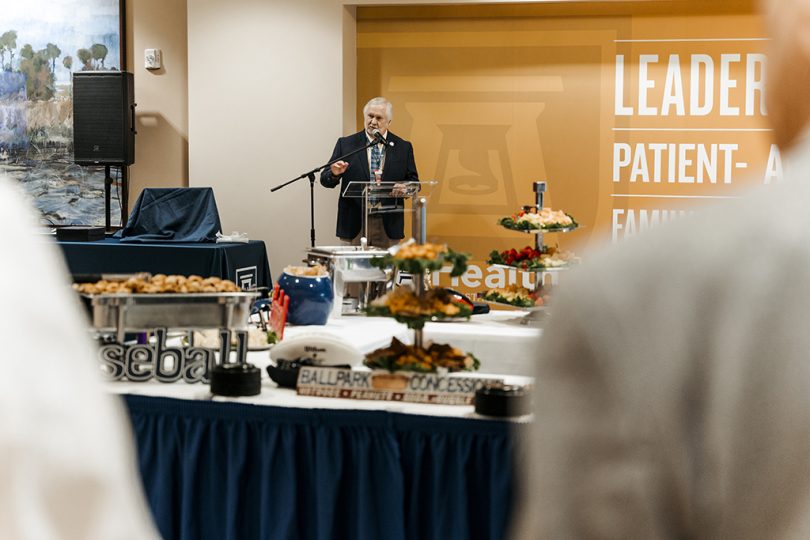 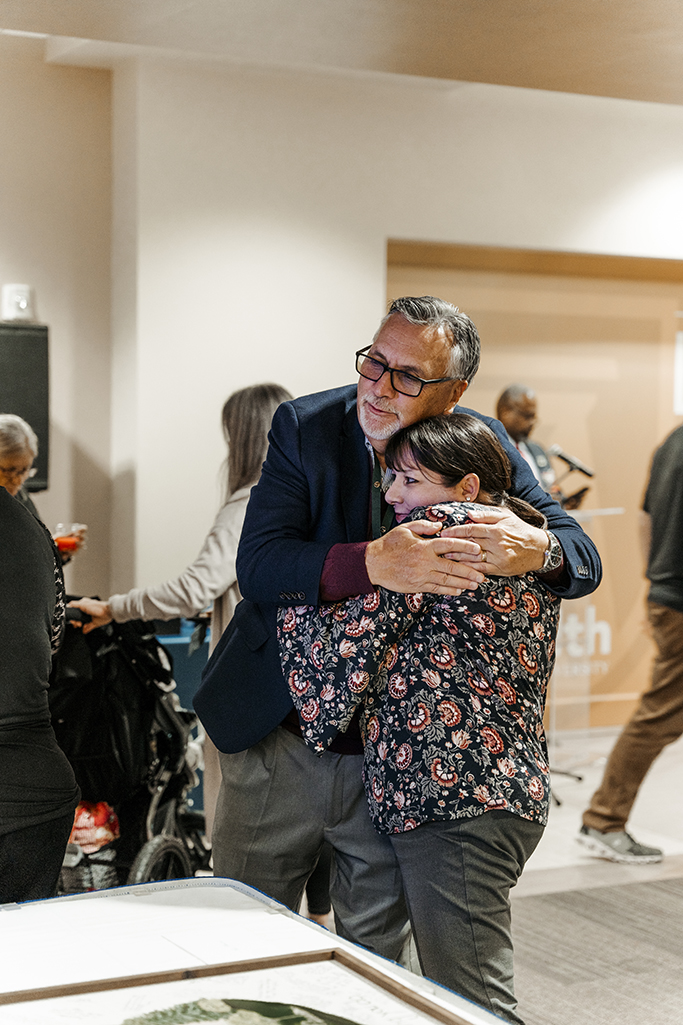 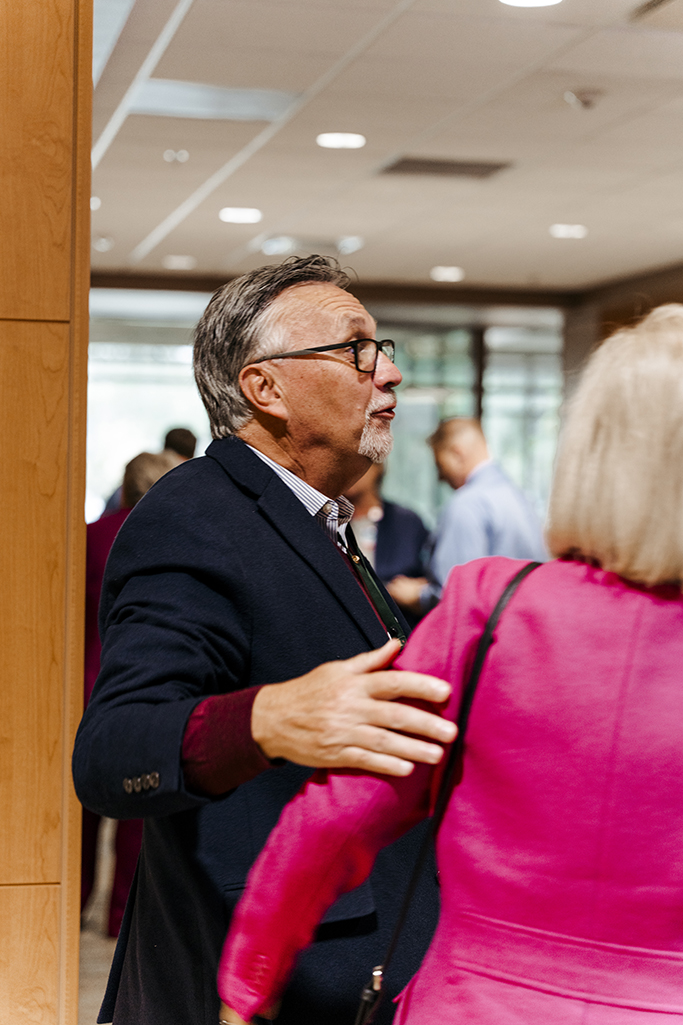 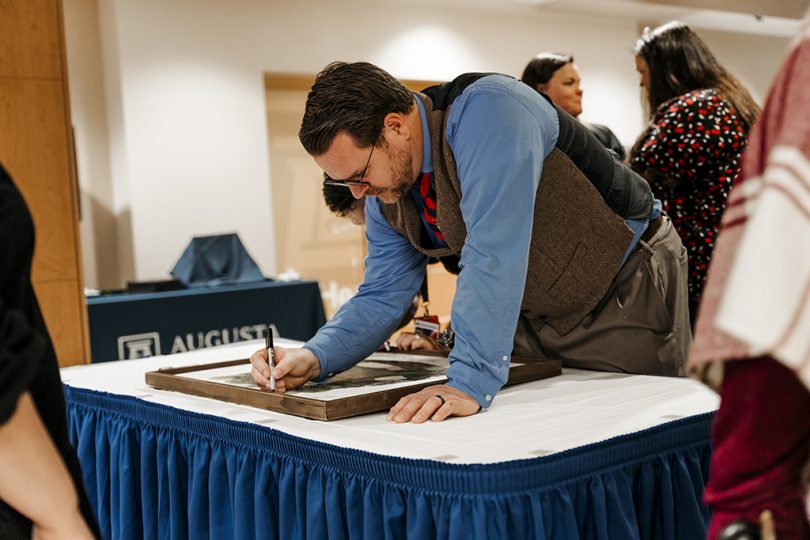 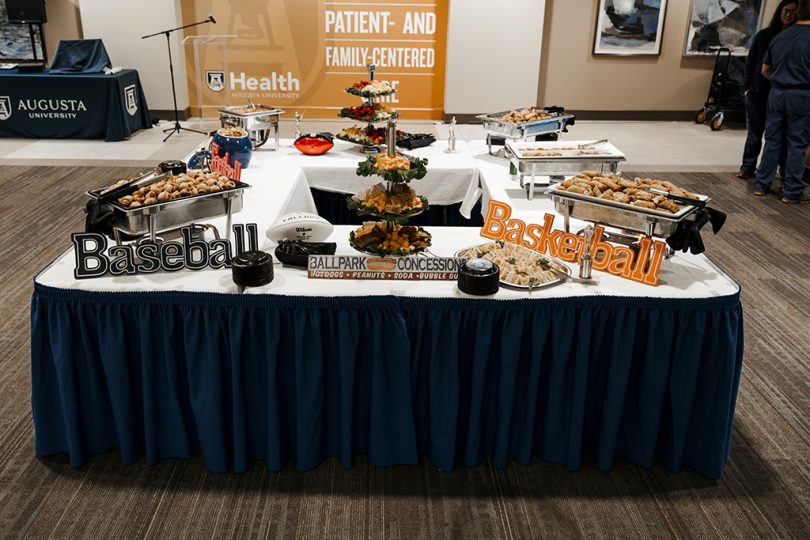 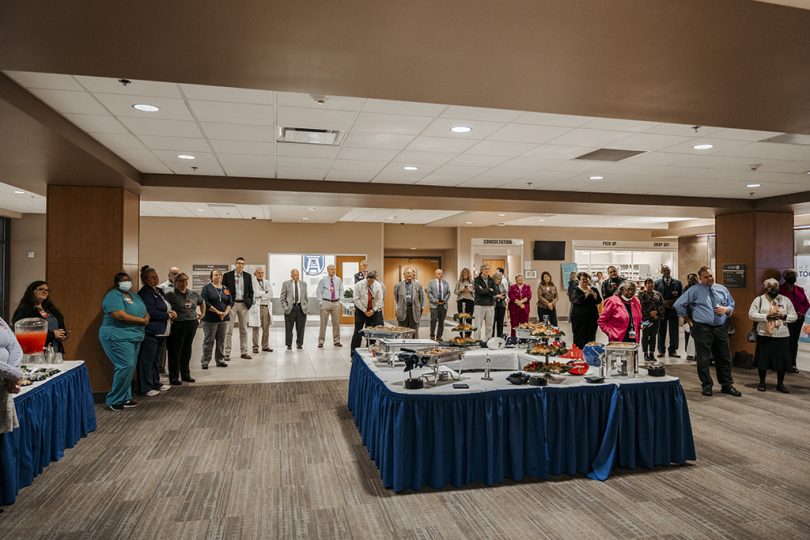 Intrigued, Flowers joined the staff of the then-Medical College of Georgia in 1994. He laughed as he recalled that the very first email he ever received was from his new boss, welcoming him to Augusta.

Flowers said he thought he may stay five years and return to Baylor to lead the chaplaincy there, but “We never left. We fell in love with the place. We love the people, love the city, love the mission.”

He and Tami put down roots and raised their family in Augusta. Tami became a principal within the Columbia County school system. Their children, Angela and Ryan, grew up and moved into their own careers – Angela a teacher in Columbia County, and Ryan in cyber security in Panama City, Fla.

Flowers’ contributions to AU Health are not small. When he was hired, he was tasked with creating a clinical presence for the chaplaincy within the health system, starting a consult service for medical ethics, and developing Advanced Directive programs. He was also the only chaplain on call whenever a patient or staff member needed him, 24 hours a day, 7 days a week.

Under his direction, the chaplaincy has expanded from just himself – with a couple of local ministers providing respite some weekends as needed – to five full-time and 10 part-time chaplains. Chaplains are now able to truly be available around-the-clock. The Office of Spiritual Care – the department’s official name – also has a teaching program, a clinical resident program, and a practicum course for local ministers. Chaplains also offer spiritual education, sacraments, rituals, and services like No One Should Die Alone for patients.

Flowers said he believes chaplains are on a spiritual mission, and their job is to identify patients’ and employees’ spiritual needs.

“When you go into a patient’s room, the spirituality is theirs. It’s the love and kindness. It’s all the things that make up the fear, the anxiety. Sometimes, it’s the comfort, the hope. It’s already there, so our job is just to identify it,” he said. “You look around the room and you see pictures of grandbabies and you realize, so that’s your energy for living. You want to see them grow up. Or that’s your sadness – you’re afraid you’re not going to get to see them grow up. We’re so privileged. We walk on sacred ground every day.”

Though he won’t be involved in the day-to-day chaplaincy any longer, Flowers will still be very much involved in AU Health. He plans to volunteer for projects that are important to him and will continue to teach palliative care on an adjunct basis.

He also plans to stay active off campus, with part time work at Augusta National during Masters Week and playing golf on local courses on the agenda. He and Tami also plan to travel around the country visiting friends and family without worrying about when to return home.

But he will always return home, to Augusta and his AU Health family.

“I just love this place. It’s become a persona that I love. It’s got its own character,” he said. “I’ve been through a lot of administrations, transitions, name changes, but at the core, this place is still the same. That’s what I love.”