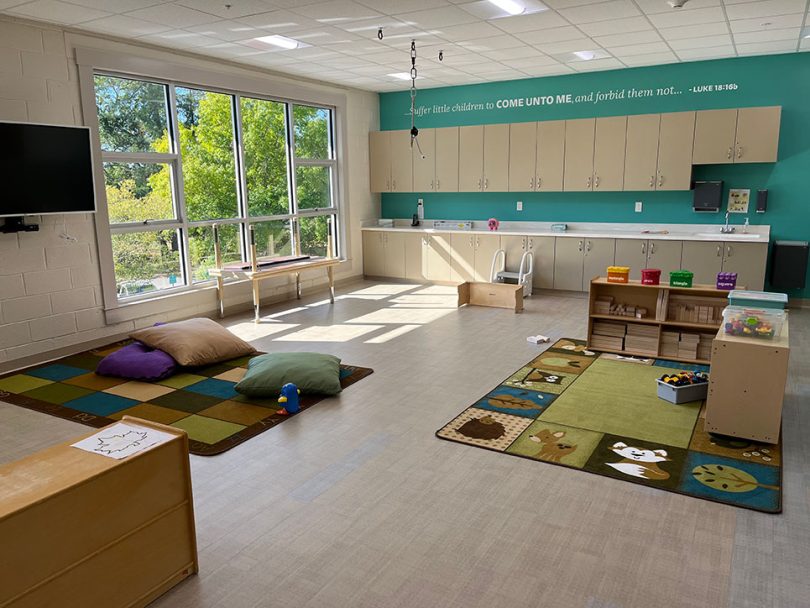 In Kelly Edwards’ world, no two days are alike. That’s the life of a school nurse, a role she’s had at Apparo Academy in Augusta since it first opened three years ago.

Apparo is a non-profit, faith-based program focusing on early education programs for those with therapeutic and nursing needs and typically developing children in the same inclusive environment.

Edwards is a master’s prepared registered nurse at the Children’s Hospital of Georgia for 30 years and has also done work as a camp nurse for 15 years at camps designed for children with special needs. She was chosen to lead the nursing staff at Apparo when it first opened.

“It’s a community within a community,” said Edwards, whose desk sits in front of a mural of Children’s. “A lot of kids have significant health concerns, the parents just feel better knowing that there’s somebody here that knows how to take care of them.”

Apparo keeps its ratio of teachers to students small, around 1:2. Classrooms will usually consist of 10 kids and three teachers, an aide, and a speech, physical and/or occupational therapist.

“The kids are doing their numbers or letters, all those preschool concepts, and also learning how to socialize with one another, especially those typically developing kids learning to socialize with folks that have a challenge,” said Edwards.

Apparo puts as much focus on its children who are typically developing as those with developmental needs. Edwards said they’re able to learn from each other almost as much from the teachers, especially those kids with developmental delays, Edwards said they’re able to interact and socialize with children that they wouldn’t be able to otherwise. She also creates educational information to assist parents to better understand and manage their child’s specific needs.

“Some of these children have never been able to be around kids. Some have siblings at home that go off to school and they’ve not gotten to do that,” said Edwards. “Being here gives all of them an opportunity to come together with children and they can interact and socialize with each other.”

It’s one of the reasons Jennifer Jones, Executive Director of Apparo, started the academy. She worked as a speech-language pathologist and realized many weren’t getting better with once-a-week, 30-minute therapy sessions. She started doing research to see what other options were in the CSRA and did not find any.

She opened the Academy in 2019 with the intention of starting small, so she could prove the concept and educate the community on the need. Two years in, the non-profit built a $5 million capital campaign in only five months.

“If you’re not in the community of children with special needs, you don’t really realize that there’s a giant gap in our community of services,” said Jones. “Once we started educating everyone and showing them our concept, the progress really spoke for itself. You’re able to see how it changes the lives of these children who are one day going to be adults in our community.”

The new expansion has brought the total number of classrooms to 10. It’ll also serve the children who are on waiting lists for outpatient therapy. This would allow nearly 100 children to be served in the preschool program and around 250 children in the outpatient program.

Jones believes the staff and partnership with AU Health and Children’s truly separates them from any other school or learning center.

“We have parents now who don’t have to rush to the ER because their kid had a seizure and our nursing staff is able to catch things with children because they see them every day,” said Jones. “They know their daily medical behavior and they can see when something isn’t right. It just makes a huge difference.”

Jones approached the Children’s Hospital of Georgia for that reason. She said parents would need to trust in their child’s care. This way, parents would be able to go back to work and know their child would receive the medical attention they needed.

“We are fortunate to have such a tremendous resource for early intervention and education in our community,” said Dr. Valera Hudson, Department Chair of Pediatrics at the Children’s Hospital of Georgia. “Apparo’s mission to assist children and their families with the necessary skills to realize their potential and achieve success, complements the Children’s Hospital of Georgia’s mission of improving the health and wellbeing of children.”

Edwards’ experience in Children’s has proved invaluable to the academy. She had previously worked in inpatient and surgical pre-op and post-op settings. Her 30-year career has seen her work with a little bit of everything. She adjusted to her new workplace by creating its policies and making sure every piece of equipment she’d need would be at the Academy, from suction machines to SAT monitors and everything in between.

She also knew if severe problems arose with some of these kids, she would need the proper medical gear with her to help in whatever way she could until an ambulance arrived.

“I can’t just stand around and wait for 911, I have the equipment to do some things until [paramedics] can get here,” said Edwards. “This isn’t the hospital, I can’t call PICU and have them run up here, but I wanted to feel that the 911 call was my PICU.”

Jones and Edwards are excited for the future of the program. They say the growth they’ve already seen has highlighted the absence of early education programs that contain specialized high-quality nursing staffs.

“I have amazing support from my director and the Children’s Hospital, and that’s been great,” said Edwards. “It’s been huge because I’ve come into a facility and I’m the only healthcare provider here. One of the first things I’m able to say to any family is I am fully employed by the Children’s Hospital in Georgia and my background comes from it.”