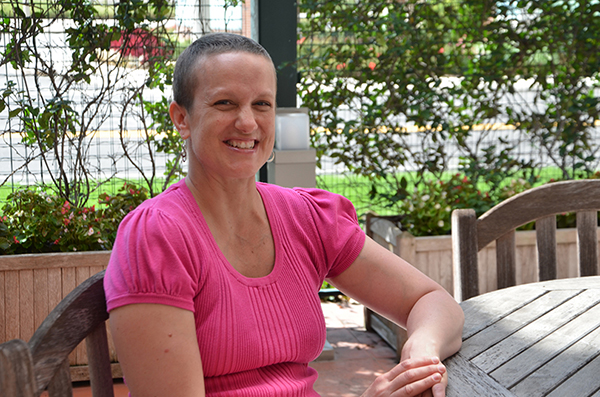 Jennifer Charney was eight months postpartum and nursing when she noticed something was wrong. She thought she was developing mastitis, an infection of breast tissue, but she knew what mastitis should feel like. This wasn’t it. But it was right after Thanksgiving, and the holiday season was kicking off. So Charney set her worries aside.

After the New Year, Jennifer met with her lactation consultant and then a doctor. On Monday, Jan. 18, 2016, Jennifer missed several calls and received two voicemails from her doctor. He needed her to come in for an appointment, the voicemails said. At that point, she knew what it was: breast cancer.

“It floored me, because you’re supposed to have a decreased chance of breast cancer when you breastfeed,” Jennifer said. “I breastfed eight children. So, I didn’t think it would happen to me.”

Together, Jennifer and her doctor came up with a treatment plan. She felt confident in the experts at the Georgia Cancer Center.

“My doctors were always willing to talk things through with me,” she said. “I always felt like I understood what was going to happen. I loved the idea of having a team working for me. I found out that they would have meetings and discuss my treatment plan, so if I forgot to tell one doctor something, they actually already knew about it. Having everything connected was convenient, but it was also a relief.”

When Jennifer began chemotherapy she remembers it as the roughest journey she’s ever been on.

“It would take me eight days to recover from a round of chemo,” she explained. “I would stay in my room upstairs, and my mom would take care of my babies downstairs. I would sit and look at a yellow wall and be fine doing that, because watching TV took too much of my energy. It physically hurt to leave the house and go to my doctor’s appointments.”

After eight days of recovery, she would begin preparing herself to go downstairs.

“I would call it going downstairs because life happened downstairs,” Jennifer said. “I would slowly start getting out of bed and trying to reincorporate myself into the life of our family. I would try to go to my kids’ soccer games or their school plays.”

Jennifer lost her hair at the end of the first round and her eyelashes during rounds two and three. She didn’t like losing her hair, but surprisingly, she was more upset with the loss of her eyelashes. Jennifer turned to the Georgia Cancer Center for support and made an appointment at the Cancer Center Image Boutique.

At the boutique, she met with Sherry Brooks, licensed cosmetologist, mastectomy bra fitter and manager of the image boutique.

With Brooks’ assistance, Jennifer tried on several wigs until she found one that was perfect. A week later, Brooks shaved Jennifer’s hair, and she went home with her new wig.

As time passed, Jennifer continued to receive treatment. Her eight children quickly became her motivation to fight the cancer. She looked forward to the day where she would go downstairs for good and take over her role as caretaker to her children.

On May 29, that dream got a little closer to becoming a reality. After six rounds of chemo and a full mastectomy, doctors told Jennifer that she had experienced a complete response to treatment and no longer had cancer.

“I knew that God had a plan for me,” she said. “I already knew that God was going to cure me, but it was nice to have that validated. I knew this was a valley for me, but I knew I would get through it.”

As Jennifer looks toward the future, there is still one more hurdle on the road to recovery. She will undergo reconstruction surgery, a procedure for women who have had full or partial removal of a breast. Doctors have said it could be another year before she feels “normal” again.

Throughout this process, Jennifer has leaned on her faith and her family.

“You learn what’s important in life,” she said. “You’re quickly reminded that the little things in life are the most important. Hearing my children’s laughter, spending time with my family, that’s what’s important. The rest of it quickly falls to the wayside.”

She advises women battling cancer to lean on their loved ones.

“Do your best to find a solid support system,” she said. “Try to visit with your friends when you feel good. Try to stay as involved in your life as you possibly can. Lean on your faith.”

For now, Jennifer is preparing for reconstruction surgery. After surgery, Jennifer and her husband are planning a vacation. They want to take their family to the beach and spend a week celebrating her return to life downstairs.