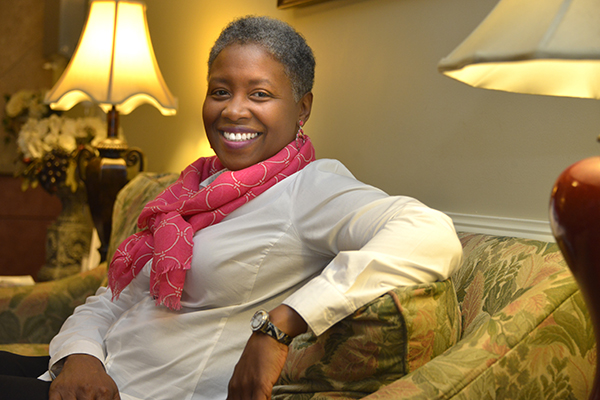 Breast cancer was the last thing on Wendy Hunter’s mind when she went to the doctor because of a painful, tender area under her ribs.

Her doctor scheduled a sonogram then noticed, “Oh, it’s time for your mammogram. Let’s schedule that too.”

The mammogram showed a spot, and the diagnosis came back — specifically invasive ductal carcinoma (grade 2), one of the most common breast cancers — “I was shocked,” said Hunter, who has no family history of cancer other than a second cousin.

But knowing the diagnosis was better than worrying and waiting to find out, Hunter and her family relied on their strong faith to meet the diagnosis head on. “I couldn’t just curl up in a ball and cry and say why me. It wouldn’t change anything, so I might as well go and deal with it as it comes.”

Hunter’s diagnosis came just before DJ was getting ready to graduate from Westside High School, so Mom made sure to work everything around his graduation activities so that her surgery and other treatments wouldn’t keep her from being there for her son. “He graduated on May 29, and I made sure to start the chemotherapy the day after,” she said.

Hunter had six cycles of chemotherapy at three-week intervals from May 30 to Sept. 12, followed by 37 rounds of radiation therapy Monday through Friday from October to Dec. 3 (excluding the holidays). The chemotherapy and radiation were fine, but the Neulasta, a shot that would help rebuild her white blood cells, was the toughest for her. “It was very achy, painful, like flu symptoms times 100,” she said. “It would put me down for a week after every shot … but lots of faith and family got me through it.”

Her mom, Quola Wright, would take care of the dinners during her treatment, while David helped out with the kids. Hunter also relied on a friend of a coworker who had also gone through breast cancer. “She knew what I felt and what it was going to be like,” she said. “She helped me a lot.”

And through it all, the Georgia Cancer Center was there too. Breast cancer team lead Dr. Shou-Ching Tang was her oncologist, and with his help and the support of the nurse navigator, Hunter could always rely on having her every question answered.

Treatment was a success, and Hunter went back for her first mammogram on March 23, which showed a clear scan. In the meantime, her cousin in Alaska was also diagnosed with breast cancer, and now Hunter can be there for her, answering her questions.

“To anyone who’s been diagnosed, I would say don’t be afraid to ask any questions, no matter how small you think it is,” she said. “And if you want to cry, go ahead and cry. You don’t have to be strong all the time. Lean heavy on your faith and a lot of prayer — that’s what got me through.”