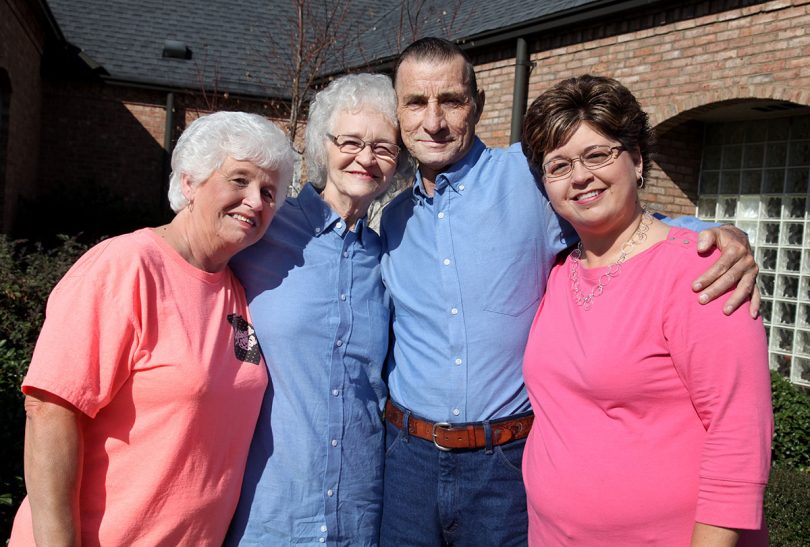 In a small town near Washington, Georgia, called Tignall, there’s one of the most tight-knit families you could ever meet – not just the kind that does Sunday dinner together but the kind that also helps each other through tough times.

At the heart of this family is a man named Henry Holsenback. Mr. Holsenback and his wife, Lois, have been married going on 50 years and have a son, three grandchildren and a large extended family.

“He ‘adopted’ us when Daddy died,” Tara George, Mr. Holsenback’s niece, said with tears in her eyes. “He’s very loved where we come from. He’s the first to help out if someone needs something.”

A carpenter by trade, Mr. Holsenback built houses for about 40 years. Now in retirement, he serves as a deacon, Sunday school leader and song director at his church. In his free time, he enjoys hunting, fishing, bow and turkey hunting.

But in early to mid-August 2016, the life of Mr. Holsenback as he knew and loved it was put on hold.

He went in for his annual checkup with Dr. Deepak Kapoor for his management of atrial fibrillation (AFib), an irregular heartbeat that causes poor blood flow and can lead to heart disease and stroke. The checkup included a cardiac stress test at Augusta University Heart and Cardiovascular Services, during which specialists examined how his heart responded to exercise-induced or drug-stimulated pressure.

As the incline on the treadmill rose so did his heart rate, sending him into ventricular tachycardia, a very fast heart rhythm that begins in the two lower chambers of the heart, the ventricles. This was shocking for an otherwise healthy person who walks four or five miles every day to experience.

In the middle of the test, he was transported to Augusta University Emergency Department via ambulance, stayed overnight at Augusta University Medical Center and went home the next day with a vest defibrillator to wear until surgery.

Right away, a team of doctors began to strategize on Mr. Holsenback’s case, which involved a leaking mitral valve, four clogged arteries and the AFib, which he had been managing for 6 or 7 years with medication. Since each of these problems was fueled by and affected the others, he needed to have the valve replaced, quadruple bypass surgery and a maze procedure, a surgical procedure to treat AFib – all at once.

Mr. Holsenback had his reservations regarding the surgery, but George, a respiratory therapist, and her sister, Melissa Rodriguez, a medical assistant, managed to talk him into it.

“He told me, ‘They aren’t going to cut me,'” George said. “He was scared to death, but we knew that if he didn’t have the surgery he would die. I told him that it was a chance he had to take – and put his life in God’s hands. I said, ‘You’re going to die with it or without it, but you might as well die trying.'”

“He was so sick that there were days when I left the hospital, and I didn’t think I’d see him the next day,” George said.

Many of Mr. Holsenback’s family members work in the medical field, including two sisters who are respiratory therapists, in addition to George and Rodriguez.

“It was God-sent,” Mrs. Holsenback said, “because when I had hard decisions to make, my family was with me to help me make them. I also appreciate the doctors, nurses, respiratory therapists and technicians. They were very caring and concerned.”

“We’d try to help out on the medical end,” George said. “When Henry ended up on a ventilator for so long, we felt guilty for having talked him into it, because he didn’t want that.”

Fighting back the tears, Mrs. Holsenback recalled when her husband went off of the ventilator.

“When they took him off the ventilator and put the speaking valve on, the nurse asked him, ‘Who’s this,’ pointing at me. He said, ‘Lois.’ She asked again, ‘Who is this?’ He said, ‘My Wife… I love you.'”

In this moment, Mrs. Holsenback knew that her husband was going to be OK.

Upon discharge, he went through cardiac rehabilitation with Augusta University Heart and Cardiovascular Services.

“I feel great,” said Mr. Holsenback, who’s walking two miles and working out each morning with weights on his legs, curls with arms and ride stationary bike.

He even plans to hunt during turkey season, from March to May 2017.

But to Mr. Holsenback, it’s less about what he’s doing and more about those who surround him.

“My family and our community stuck by my side,” he said. “They prayed for me and helped out financially so Lois was able to stay close to the hospital, since I was so unstable. They called daily to see if we needed anything. We appreciate everything that was done on our behalf. I am living proof that God answers prayers.”

What Mr. Holsenback has spent all of his life giving to other people certainly came right back around to him during his recovery: support, prayers and love – lots of love.