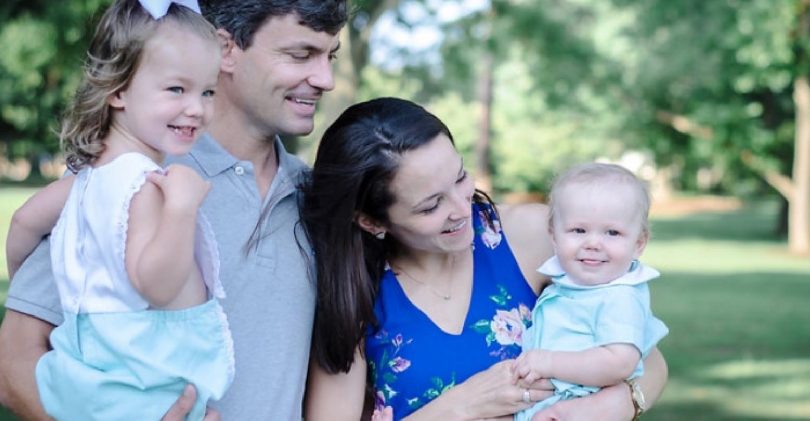 For any mom, having to take your child to the emergency room just one time is scary enough.

For Ashley Fisher, multiply that by four.

“I’d never seen a fever that high in my life,” said Fisher, when she brought daughter Ali, then only 9 months old, to the Children’s Hospital of Georgia pediatric emergency room.

At 20 months, Ali also toppled off a chair and cut open her lip. With blood pouring everywhere—and not stopping—a frantic Fisher rushed her and her newborn son Frank to the ER, calling her mother-in-law for help along the way since her husband was out of town. “We were afraid that she had bitten all the way through the lip,” said Fisher.

Five months later, it would be Frank’s turn. Fisher’s daycare called to report that the baby had a fever of 102 degrees, but it had gone down to 100 by bedtime. An hour later, Fisher heard a “funny noise” as she was brushing her teeth. She went in to check on Frank, and he was in the full throes of a febrile seizure. “It was the scariest thing I’d ever witnessed as a parent,” she said. “I laid my hand on his back and he was spasming and his eyes were rolled back, and I was screaming to my husband.”

Next came a stomach virus when Ali was 2, with vomiting so severe that her pediatrician recommended she go straight to the ER.

Thankfully, all four situations ended well—which Fisher credits to the care and reassurance she received at the Children’s Hospital of Georgia’s dedicated pediatric emergency room.

Across the United States, 90 percent of children receive emergency care in a community hospital emergency room. Care usually is fine. But for the remaining 10 percent, who like Fisher’s children, received care in a pediatric ER, there’s still a marked difference.

“It’s designed specifically for my kids,” said Fisher, “to make them feel as comfortable as possible. To me, that’s a comfort, too, plus knowing the extra training the physicians and staff have to take care of kids and only kids.”

When Ali cut her lip, Fisher said the family went quickly back into a room, where a child life specialist helped distract the wailing toddler with a light-up toy so that the Dr. Jennifer Tucker, a pediatric ER physician, could examine her. “Dr. Tucker was so good with her, and child life was so sweet,” said Fisher. “Everybody in there went above and beyond. They explained that Ali wouldn’t need stitches and cosmetically it would be fine, but they could tell I was a worried mom and offered to bring in additional specialists so that I could feel more assured. It was just such a positive experience, and before we left, child life gave her a Minnie Mouse that she sleeps with to this day!”

With Frank, Fisher was fortunate to see Dr. Tucker again, who diagnosed the seizure as being related to his fever—in just the hour after being tucked into bed, Frank’s temperature had spiked to 104 degrees. She also answered Fisher’s concerns about possible impacts on Frank’s development—“Dr. Tucker was so very reassuring and was sharing stories of her own children, who had gone through the same thing.” (Febrile seizures are common in toddlers and usually end without treatment, with no other resulting health problems.)

When she was a young child, Fisher remembers being taken to the emergency room herself. “I remember white walls and nothing special,” she said, compared to the colorful and kid-friendly pediatric ER at the Children’s Hospital of Georgia. But beyond that, every piece of equipment and every treatment is also designed just for kids. “I think it says something about the level of care you receive too when you know that the people you’re going to were trained specifically to treat emergency situations for kids,” said Fisher.

“We really and truly couldn’t go anywhere else.”

The Children’s Hospital of Georgia is turning 20!

For 20 years, we’ve been leaders in pediatric care. How do we do it?

For one thing, it’s our belief that family comes first. It’s giving children the love and attention they need to heal. It’s using the tools we’ve been given to make miracles happen. Every day, the Children’s Hospital of Georgia helps kids live their very best lives. That’s something to celebrate.