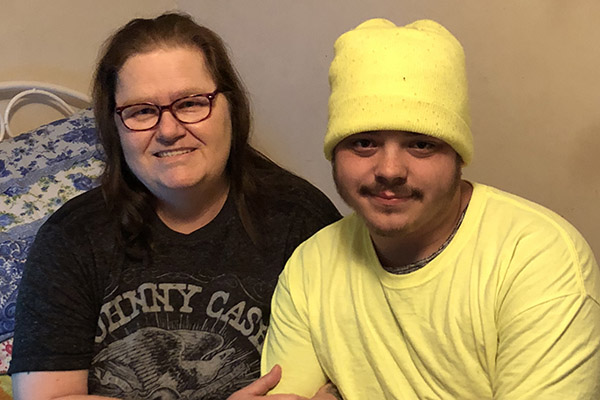 For Terese Wood, the joke hit a little too close to home when she had a heart attack on the night of her 40th birthday.

“I didn’t want to believe it,” she said. She was sick to her stomach, had pain in her chest and shoulder running into her left arm, and felt clammy and sweaty. “I kept taking Tums, but they weren’t working. I thought, ‘It’s got to be my heart.’”

The next morning, she dropped her 12-year-old daughter off at school, then went to the emergency room at a community hospital. Her tests came back clear, but a cardiac catheterization procedure found the problem: a 97 percent blockage in her LAD—the left anterior descending artery, which helps supply heart muscle with blood.

Blockages in the LAD are often the cause of what’s called a “widow-maker’s” heart attack.

Wood got her first stent that day—but that wasn’t the end of the story.

Heart valve issues run on her mother’s side of the family, but not blockages. Wood never knew her father and thinks her heart issues must come from his genes. Because despite the community hospital’s best efforts and Wood sticking to a strict diet, along with taking blood thinners and cholesterol medications, her LAD kept closing up and triggering more attacks.

Over the next 18 years, she would have 55 heart catheterizations, receive 22 stents, undergo two open heart surgeries and die three times.

With interventional cardiologist Dr. Jacob Misenheimer, Wood would undergo a new procedure, offered at only a few centers in the country: intravascular brachytherapy.

For heart patients with blocked arteries, stents—including drug-eluting stents, which are coated in medicine that helps keep arteries from closing back up—are usually an effective way to keep blood vessels running smoothly. But for a small percent of patients like Woods, blockages keep happening, even with medications, diet and repeated stenting. A common cause? Scar tissue building up inside the artery.

With intravascular brachytherapy, after an artery is reopened, the treatment applies a small amount of radiation to the stented area to help stop tissue from regrowing inside the artery.

Highly specialized protocols have to be put in place for brachytherapy, and Wood had to wait nearly two years for the approval process. But her LAD was treated in 2016: “I was all for doing it because we couldn’t put any more stents in,” she said. “It took about two and a half hours, and it’s kept it clear.”

Her problems still aren’t over. Wood’s right coronary artery, or RCA, started having the same issues as her LAD two years after her second open heart surgery. She’s now had 10 stents placed, including six in just one area. Wood knows her body, and she’s feeling the same symptoms as before: “I’m in heart attack mode,” she said. The plan is for her to undergo brachytherapy again—but she wants to do one thing first.

“I’m really hoping beyond all hope I can walk the American Heart Association’s Heart Walk, with Augusta University Health this year,” she said. She’s been going to the gym and walking to get ready. “I may not walk as fast as everyone else, but I think that would say a lot about the support I’ve been given by everybody for people like me.”

She always thinks back, too, to the prayer she prayed before her second open heart surgery—which happened just six months after the first—when her surgeon told her that without it, she’d only have about 24 hours to live. She had a young grandson at the time. “I said, ‘God, please don’t take me out of this world—my grandchildren are going to need me.”

That grandchild is now 21.