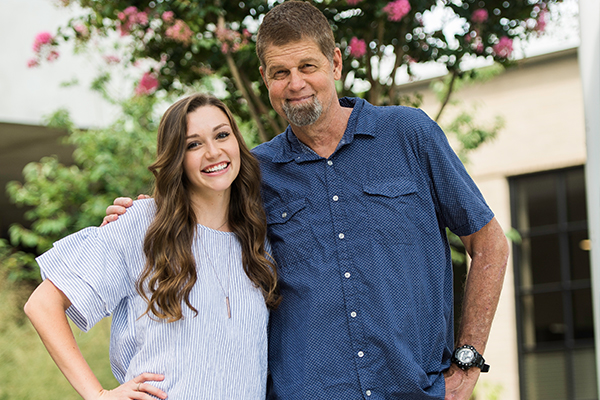 For the rest of his life, Michael Gray will always have a part of his daughter inside him. Specifically, one of the kidneys she donated to him to save his life.

“I love my father, and I was willing to do anything to see him live a happy and healthy life,” said Bailey.

About 25 years ago, Michael was diagnosed with IgA Nephropathy, also known as Berger’s Disease, which is a result of the antibody immunoglobin A lodging itself in the kidney. This illness causes inflammation that interferes with the kidney’s ability to filter wastes from the blood.

To correct the problem, Michael was placed on a kidney transplant waitlist and would eventually receive an organ that functioned well until he began experiencing health challenges last summer.

“Last year, I started not feeling well and, as my health declined, doctors discovered my kidneys were failing again,” said Michael. “I knew I didn’t want the possibility of having to wait up to 10 years to find a match.”

Meanwhile, Michael’s children were tested to find out if they could be potential donors to their father and the family received word just a few days before Christmas that Michael’s son Andy was a match. However, after more extensive testing and only a short time before the scheduled surgery, doctors discovered Michael had an antibody that could complicate the donation and lead to more health challenges.

“This was an emotional blow to my family because we had come so far in this process in trying to save my dad’s life,” said Bailey. “But, I am grateful at how Shelby Adams at the medical center worked to speed up the testing process to see if I could donate my kidney to my father.”

Bailey worked with Adams, the Living Donor Nurse Coordinator at Augusta University Health’s Kidney and Pancreas Transplant Program and completed the necessary tests that would eventually deem her a perfect match for her father. She broke the news to him on his birthday with a shirt and card that stated in part “Happy birthday, Dad. I hope you like your shirt and my kidney.”

On June 6, Michael and Bailey were wheeled into surgery at Augusta University Medical Center, and their lives were changed forever. Michael got his kidney and Bailey got her Dad back.

“Bailey is my youngest and I was nervous about her going through all of this for me,” said Michael. “I am grateful to know she is okay and the care that we both received at the medical center was amazing.”

Bailey, a biology major at the University of Georgia, and Michael, a former service member in the U.S. Navy, are both recovering at the family’s home in Evans, Ga. Physicians at the medical center are closely monitoring Michael for any signs of his body rejecting the new organ. For now, his health continues to improve and Bailey is also feeling well.

“Since the surgery, we have been relaxing together watching movies and playing with the dog in the backyard,” said Bailey. “It just really feels good to know my dad is doing better.”

Michael added his thoughts, “This has been a long road of health battles for me, but there are no words to describe the feeling of knowing your children would do anything to save your life.”

Augusta University Health is home to the 14,000-square-foot Carlos and Marguerite Mason Solid Organ Transplant Center, and over 2,600 lifesaving kidney and pancreas transplants have been performed at the medical center since 1968. AU Health is one of 19 hospitals in the United States and the only medical center in Georgia, to be selected to take part in the initial Collaborative Innovation and Improvement Network that aims to improve kidney transplantation nationwide. AU Health is also a two-time national Kidney Transplant Center of Excellence.