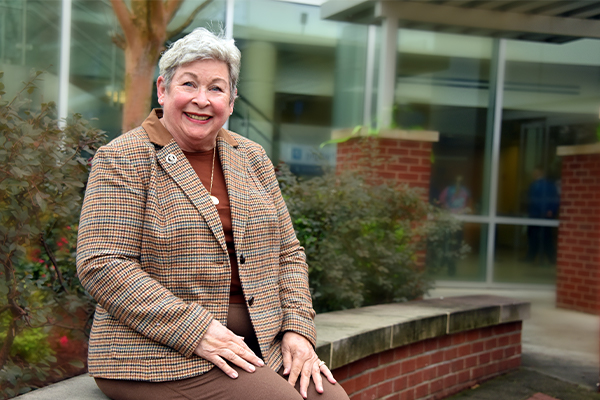 She has a big personality, a love for life, a love for horses and a passion to get to know more about the people she meets. But, for Peggy Hartz, a terrible accident in 2014 change the course of her life in a way she never expected.

“In April 2014, I had a very serious crash involving a horse-drawn carriage,” Hartz said. “I was ejected into the side of a barn head first. While the medical team treated me for my injuries, two months later I was having quite a bit of pain. After days of testing that included an ultrasound and an MRI, my doctor showed me the mushroom shaped tumor growing out of my kidney. It was about the size of my kidney at that point.”

At the time, Hartz lived in California. After receiving her diagnosis, she met with the director of the Department of Urology at the University of California, Davis Health medical center. Once they removed the tumor, Hartz learned her cancer was clear cell carcinoma.

“I think one of the more humorous moments happened during pre-operation planning,” she said. “There was a young man who came into my room with a clipboard asking me to sign a paper saying I would donate the tumor to the hospital for research. I told him I didn’t plan on taking it home and framing it or naming it, so he was free to have it. At first, he didn’t know what to say.”

Once the tumor was removed, Hartz’s doctor told her that her kind of cancer should never return. So, she and her husband went on with their lives. While it was not easy in the beginning, Hartz said she made the most of her life and lived in-between the three-month and six-month follow-up visits. Almost two years later, in September 2016, the couple decided they wanted to move to Aiken, South Carolina after Hartz made the cross-country trip to visit her friend.

“Having seen Aiken and fallen in love with it, I came back and told my husband you need to see this place because I think it might be our retirement destination,” she said.

While she had been keeping up with her follow-up visits for the cancer, but with the move and getting settled in a new place, Hartz had let the visit slip. So, in February 2017, she made an appointment with a urologist in Aiken for her follow-up visit. It was then that she learned the unfortunate truth, the cancer didn’t get the message that Hartz’s doctor in California gave her.

“This time, it was not growing on my kidney,” she said. “It was growing near my kidney. So, I underwent a procedure where the surgeon goes in, freezes the tumor and kills it. It’s kind of like putting Drain-O inside your body.”

Six months later, Hartz learned the procedure did not kill all the cancer.

“It was waving ‘hello’ when we looked at the results of the MRI,” she said. “So, we decided to watch it for a while. It was a year later when I went back for a follow-up that we found the tumor was growing and building its own supply of blood vessels.”

Hartz and her doctor decided to wait until her husband received his own pending diagnosis for a persistent condition before proceeding with her surgery. Unfortunately, he died six weeks later. So, six months later in January 2019 a friend convinced Hartz to call for an appointment with Dr. Klaassan at the Georgia Cancer Center. It was then that she met Dr. Zach Klaassen.

“In meeting Dr. Klaassen, my friend told me Dr. Klaassen was one of the good ones,” she said. “I told my friend I couldn’t believe I found him all these years since my original diagnosis. He could really hear what I was concerned about with being cut open again. Dr. Z was respectful of my personal body awareness and knowledge after trauma and surgical procedures. Cancer patients know what’s coming when we go in for surgery. We don’t want to be there. We know it hurts. It takes a lot of courage not to turn around and run down the hall.”

While Klaassen and his surgical oncology colleague Dr. Jim Kruse got all of the cancer, fixed Hartz’s diaphragm and removed tumor growth from her kidney, pancreas and spleen, the recovery was anything but normal. “That was on January 8. About 2 a.m. on the morning of January 9 in my hospital bed I had a heart attack which was kind of good I was at the hospital I suppose.”

Just 2 days later and Hartz had a stent placed in her heart. When she came home, she started receiving nursing care at her home. Unfortunately, her nurses could NOT understand why she unable to lie down in her bed without feeling like she was drowning; though she had no trouble sitting in her recliner.

“Eight days after coming home we learned why,” Hartz said. “I was in heart failure. So, it was back to the hospital where they put in one drain and got a liter of fluid from around my heart. Two drains and a transfused pint of blood later, I went back home again.”

According to Hartz, she couldn’t pray, couldn’t read and she would spend hours in her recliner. She did not have much of an appetite. However, Hartz is determined to make the most of her life after being encouraged by friends to get back in the saddle… literally.

“My friends in Aiken started using the terms resilient and resilience when they came to visit me,” she said. “They would come and sit with me, maybe share some news. They would bring me their strength and presence. There’s not much I remember during the first few weeks after having the heart failure experience. But I do remember thinking that if I could get back to being around horses, I would be okay.”

It was a friend’s offer to go with a hunting group in Ireland that helped push Hartz to increase her health recovery efforts. While she had more energy some days than others, she started looking at what were the most important things in her life.”

“Having something that draws you back to life is so important,” she said. “I don’t have time to waste. I’ll do what gives me the most joy. It’s horses and horse-related activities.”