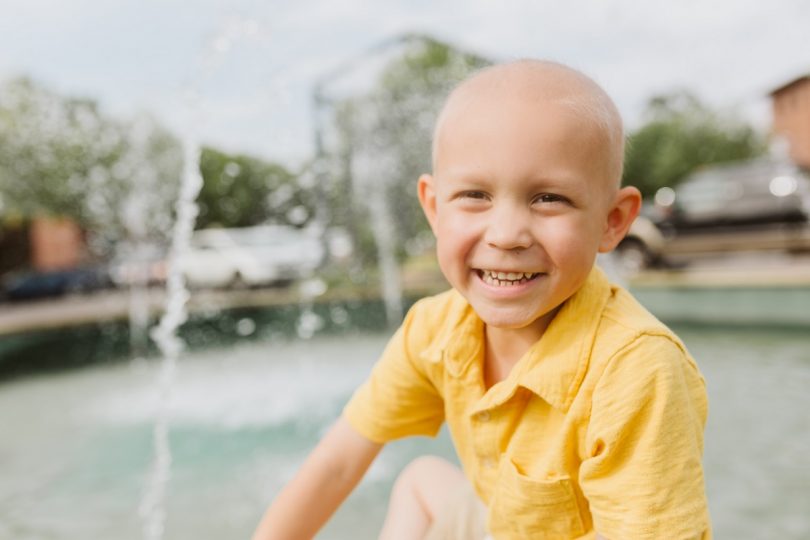 It was just a lump on 4-year-old Hudson’s neck, no bigger than a dime.

His doctor told his mom, Jennifer, not to worry about it.

As a nurse, Jennifer didn’t like what she was seeing—especially since “it just stayed there. I could understand it being enlarged if he had a runny nose and cough and fever, but with no other symptoms, why?”

Even as the lymph node grew bigger, Hudson’s doctor told her it was likely nothing. But nurses don’t quit—even more so when it’s something wrong with their four-year-old boy who chatters a mile a minute and whose favorite T-shirt sports the words, “’Sup, ladies?”

Jennifer got her referral to Dr. Robyn Hatley, a pediatric surgeon at the Children’s Hospital of Georgia. It was just in time. Over the weekend, Hudson’s lymph node swelled to the size of a ping-pong ball, and he got his first fever.

That Monday, Dr. Hatley did a biopsy. The family already felt like they were friends with this gentle surgeon who is just as comfortable performing complex surgeries in the OR as he is plopping down next to Hudson to talk sports and share Paw Patrol stickers. “I could tell then he was concerned,” said Jennifer. “He had a long conversation with us about how it could be nothing, but it could be something.  And he said that if it was, he’d call me and ask me to come in.”

The call came on Wednesday. “He said, ‘OK, I’m going to be straight and tell you like it is. You need to come in now, we’re going to direct admit Hudson. He has cancer.’” Jennifer pauses for a moment. “That’s what I needed, for him to be straight with me, tell me what it was, then do something about it.”

Tests revealed that Hudson had T-cell acute lymphoblastic leukemia. That night, Jennifer, her husband, Brandon, and Hudson met Dr. Colleen McDonough, the pediatric oncologist who would put Hudson on a plan. After doctors put in a picc line, Hudson would start on five days of chemo, then six to eight months of intense chemotherapy treatment where he would need to come in every week, followed by maintenance therapy for three years.

“I had a few moments,” said Jennifer, whose family also includes 7-year-old daughter Tenley. “We all did. But you know, you try to remember there’s a plan. I’m strong in my faith and I try to think that He’s got a plan, even if I don’t know what it is.”

Hudson’s been in treatment now since December 2018. His blonde hair is gone, but the exuberant little boy is just the same as he always has been. Which is a blessing. “We’re doing good. Tenley, we try to keep everything as normal as possible for her,” said Jennifer. “Brandon shut down in the beginning, but right now he’s doing good too. We hope it continues as well as it has and that we can keep him at home as much as possible.”

Hudson’s nickname at the pediatric cancer clinic is “Man of the Year.” “It’s because they love him so much and he’s so outgoing,” said Jennifer with a laugh. “He loves to squire the nurses with the flushes that they use to flush the port, and he offers them bites of his chicken nuggets because he thinks they’re hungry.

“We’re happy,” she added. “He couldn’t be doing any better. And we’ll take our good times while we’re having it.”