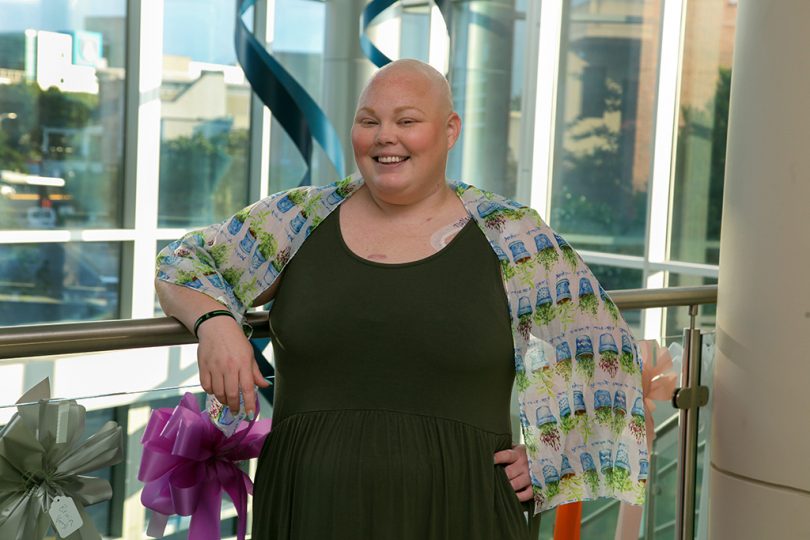 At 11 a.m. today, Lauren Jackson began a transfusion to receive her own stem cells at the Georgia Cancer Center.

The bone marrow transplant she underwent will treat her non-Hodgkins T-cell Lymphoma. The Bone Marrow Transplant Program at the Medical College of Georgia at Augusta University was begun by Dr. Anand Jillella in 1997. He performed the first autologous stem cell transplant on Wanda Attaway of North Augusta to treat her breast cancer.

That year, Jillella and his team performed 19 such transplants.

In December 2020, the program reached a milestone of performing 100 transplants in one calendar year. 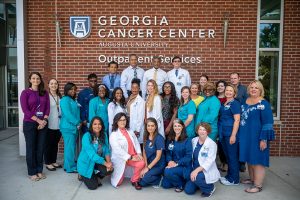 The 35-year-old Jackson and her wife, Chris Karamalikis, moved to Savannah, Georgia, from Florida in 2019 before because Jackson had visited and fell in love with the charming city. Less than a year later, she received her cancer diagnosis.

“Basically, so in December of 2019, we moved to Georgia, then Covid hit in March, then cancer hit in June. We’ve had quite a year and a half,” said Karamalikis.

Jackson underwent chemotherapy for her lymphoma and went into remission. But then it came back with a vengeance.

“I found probably a quart-sized lump on my spine,” she said. “It grew very quickly, and now it is in multiple sites.”

Last Wednesday, Jackson took a very high dose chemotherapy. Today, her transplant returned her stem cells to her body, where they will restore her body’s ability to produce blood cells and fight off infection.

As the transplant staff celebrates this milestone procedure, Jackson will move into isolation to protect her immune system and give her transplanted stem cells time to work.

Jackson will receive a basket of Georgia Cancer Center swag as part of the celebration. The milestone was celebrated by staff with cake and balloons, while guests viewed a slideshow of photos of patients and staff throughout the program. Awards were given for each department that contributes to the Bone Marrow Transplant Program’s success.

Last week, Jackson said she was nervous about the procedure but “excited that my own body can save itself.”

She said she is thankful for the support of her care team at the Georgia Cancer Center.

“I have not met a doctor here yet that does not have the most kind and understanding bedside manner,” she said. “They take their time. They’re wonderful.”