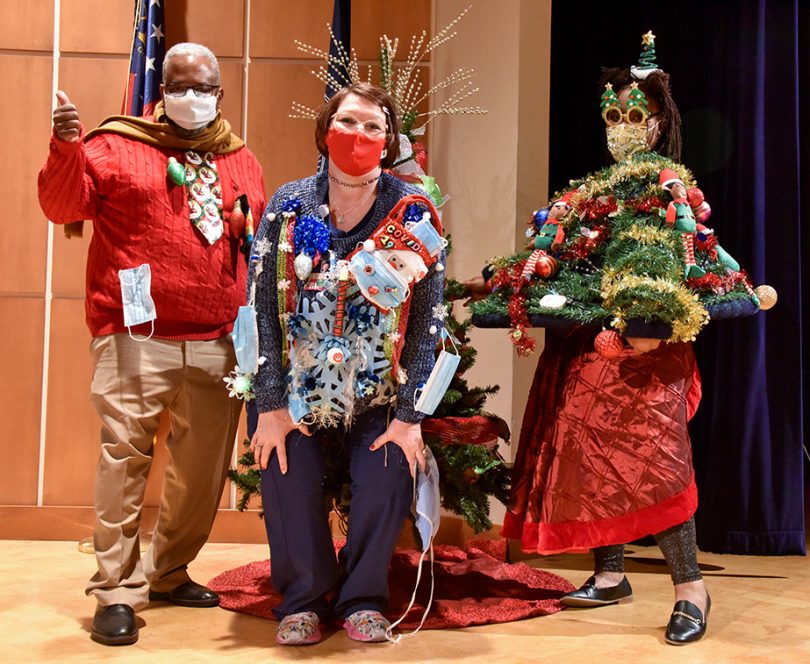 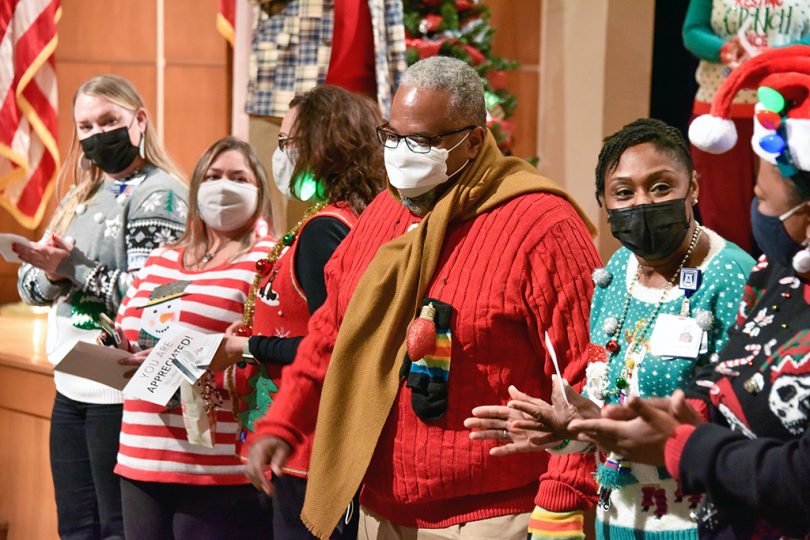 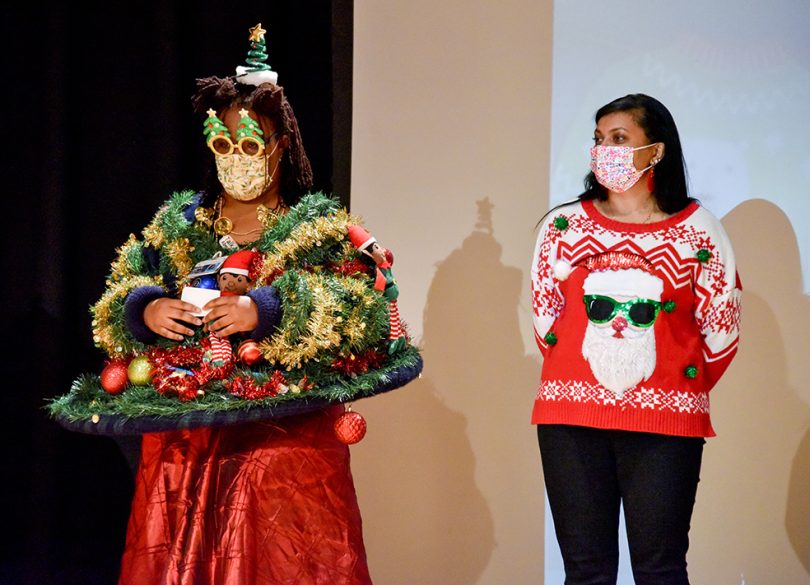 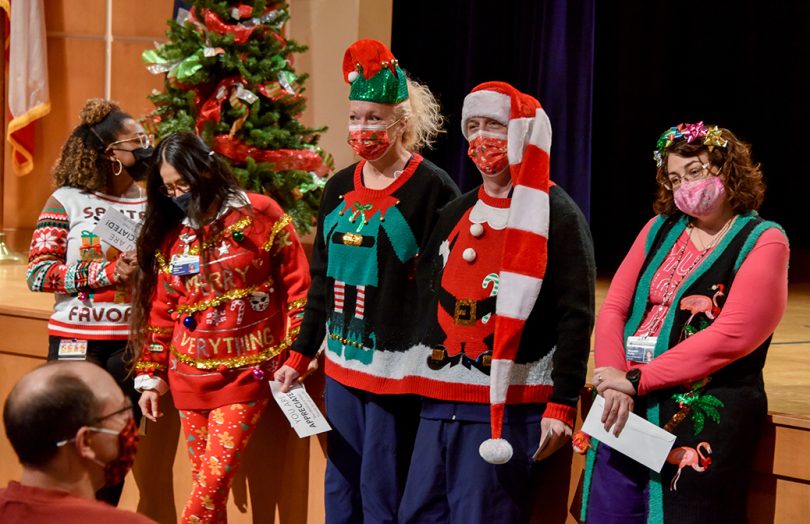 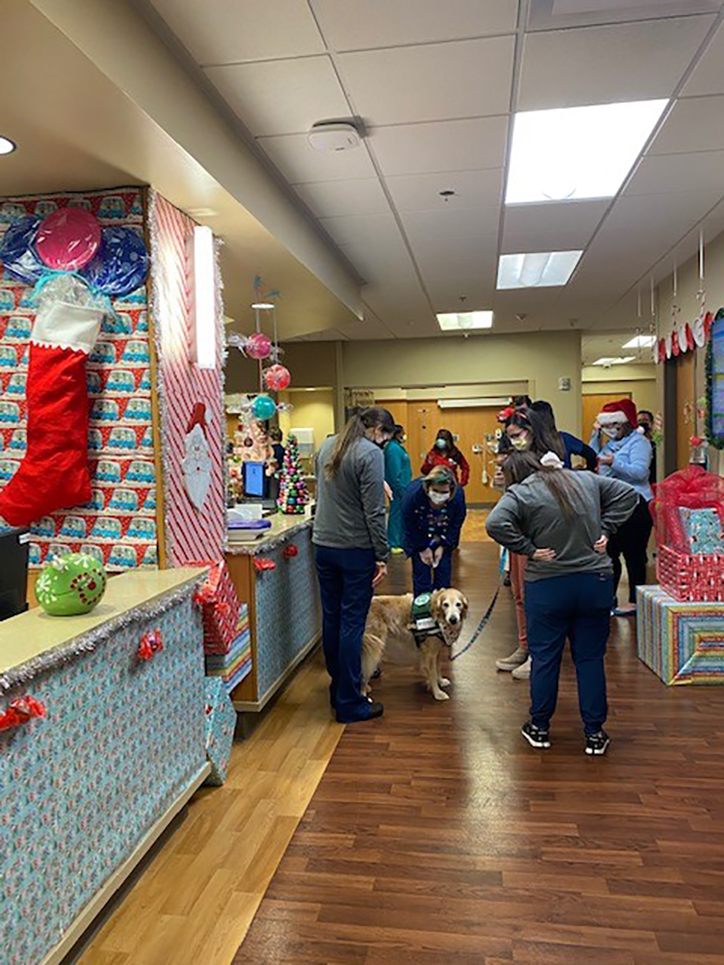 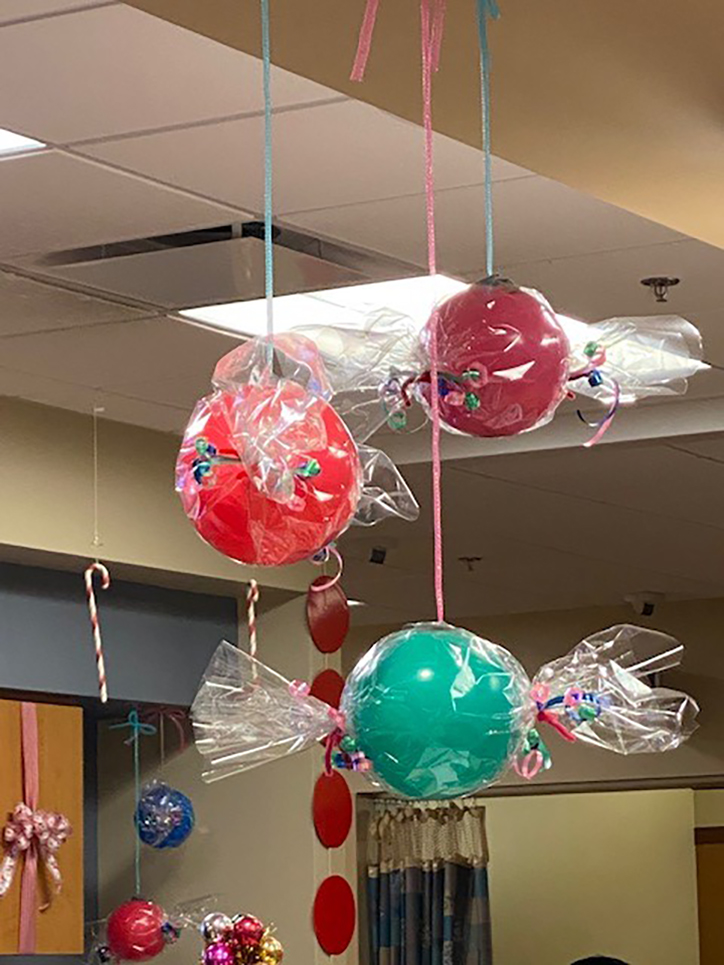 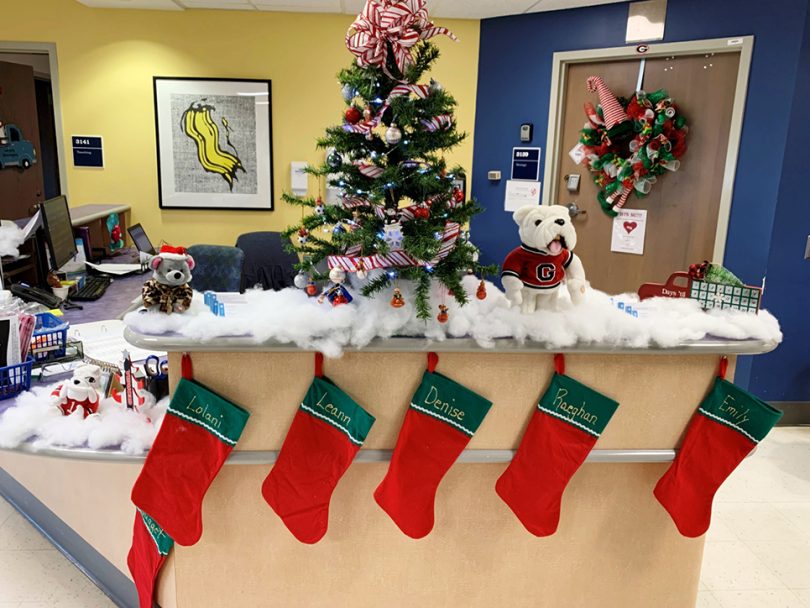 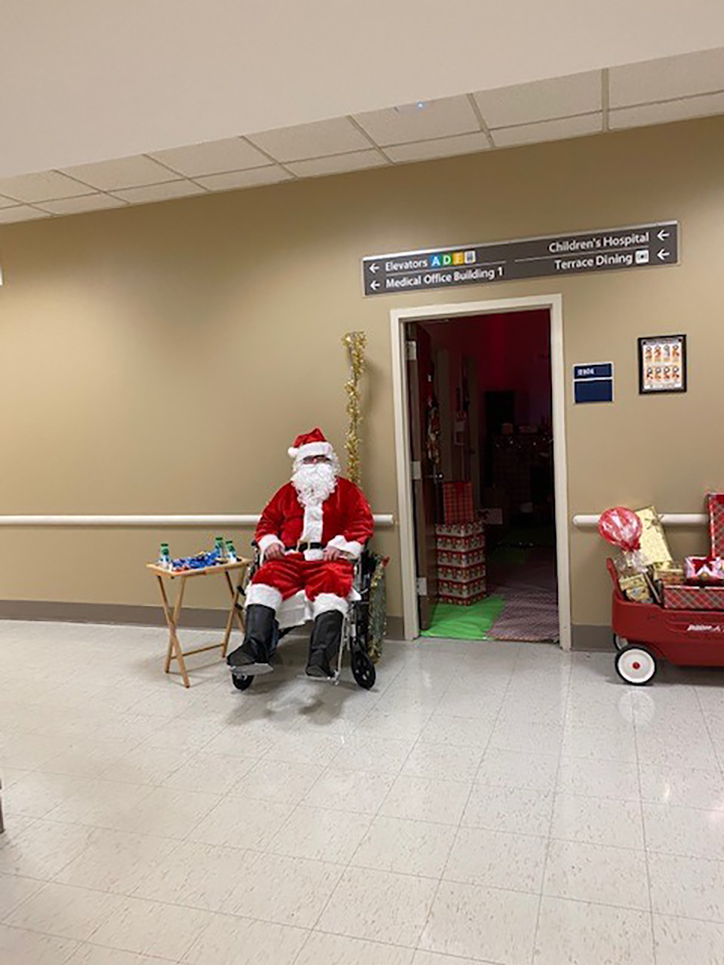 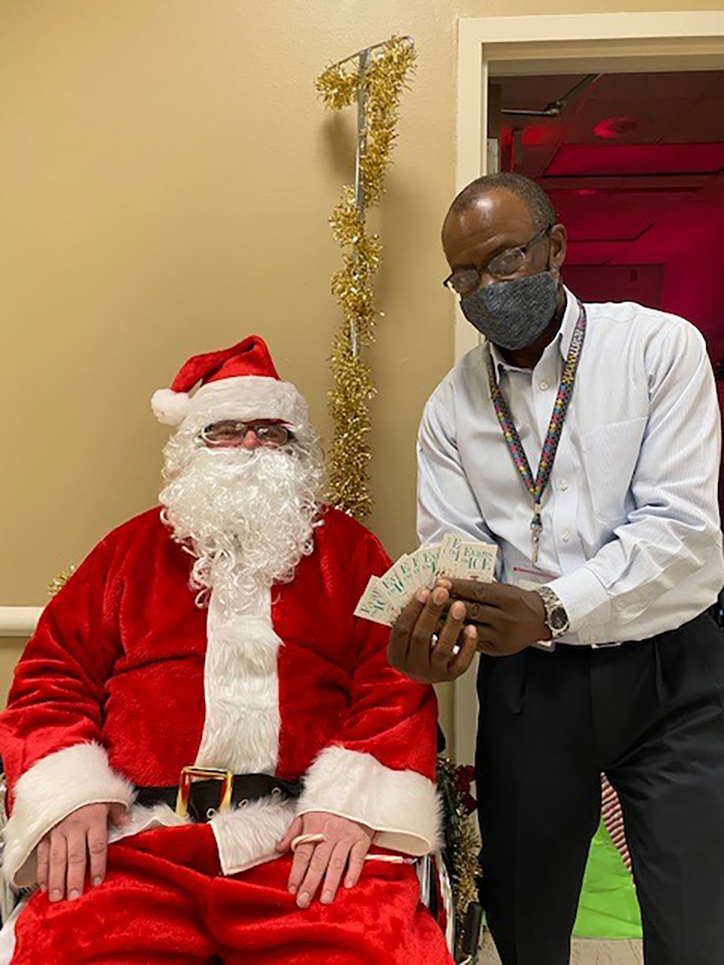 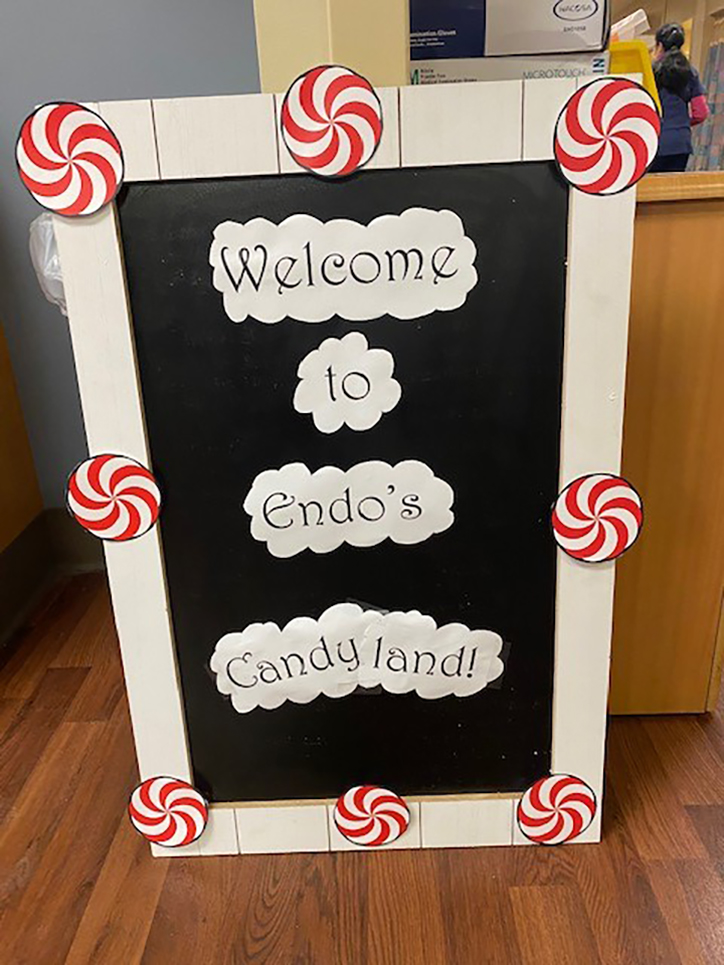 The holiday spirit is clearly visible at AU Health! The AU Health 12 Days of Holidays kicked off the season with the Holiday Decorating Contest. Three winners were selected from nearly 60 entries and will receive a meal for both shifts in their entire areas. The Pediatric Surgery Clinic placed third with traditional decorations that celebrate the University of Georgia, topped off with a stocking for Nugget. The Transport Department won second place with a cozy home theme, complete with stocking-clad fireplace and a “Nice” list hanging by the Christmas tree. Santa was there to greet the judges in his decorated wheelchair! Endoscopy claimed first place as they went all out with an extravagant Candyland theme that spread throughout multiple nurses stations, hallways and rooms. They even converted an Omnicell medication dispenser into a candy dispensing machine. Their Christmas trees provided lots of laughs as they were covered with a variety of ‘’poop-humor” ornaments.  All of the units, clinics, and departments that participated did a great job and continue to spread holiday cheer with their creativeness.

Continuing the holiday spirit, nearly 100 staff participated in AU Health’s Ugly Sweater Contest. Claiming bragging rights to the title of ‘Ugliest Sweater’ during the contest was first place winner Acacia Bynoe, PCT, 5S BMT. Acacia’s skirt was fashioned from an actual Christmas tree skirt and her sweater was designed with social distancing in mind. Second place winner is Stephanie Hillary, RN, Shock Trauma, whose sweater told the story of healthcare heroes being a light during the pandemic, and even featured face masks that were part of her attire. Taking third place was Chaplain Henry Holt, who broke out in a song as he was judged.