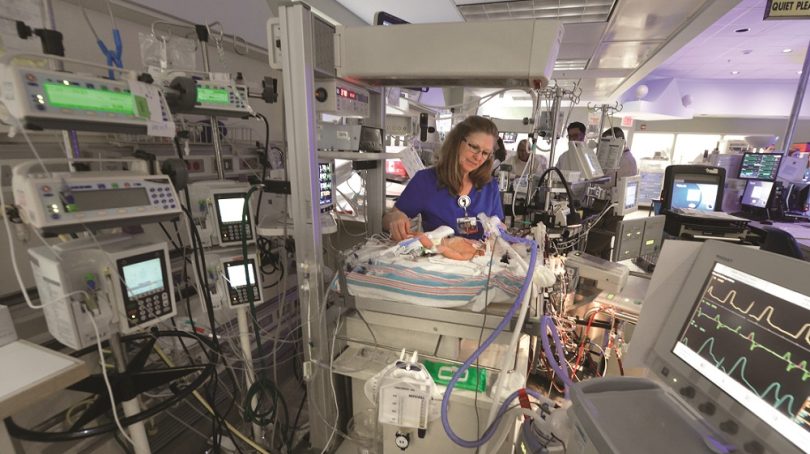 As the past chairman of the Children’s Hospital of Georgia Philanthropy Board, Jones could be called out for favoritism. But the facts speak for themselves. Over the past decade, Children’s Hospital of Georgia has been ranked among the highest performing in the nation for pediatric quality and safety when compared to pediatric care at peer academic health centers across the U.S.

Jones’ second point is the outstanding medical advances and innovation that draw patients and families to Children’s Hospital of Georgia. “Advances places like M.D. Anderson, Duke and St. Jude do not have,” Jones boasts. “Patients come here from Europe, the Middle East and, of course, from all over Georgia and South Carolina. You wouldn’t think that, but Children’s has a broad reach.”

One of those medical advances with a broad reach is the ECMO program. The first ECMO machine in the Southeast was established in 1985 at Children’s, and for more than three decades, ECMO has provided life-saving care to more than 650 infants and children with critical illnesses at Augusta’s only children’s hospital.

Extracorporeal membrane oxygenation, or ECMO as it is more commonly called, works like a heart-lung bypass machine in infants and children. ECMO helps stabilize a young patient’s lungs and/or heart while an underlying disease or issue is managed. The ECMO system uses a pump to remove blood from the baby or child, infuse the blood with oxygen, and then re-circulates the oxygen-rich blood through an artificial lung and back into the child’s bloodstream.

So far this year, five children have been placed on pediatric ECMO and two babies on neonatal ECMO at Children’s. The demand for pediatric ECMO has increased so much that Children’s needed another machine so that no pediatric patient would have to be turned away from ECMO care.

Andy and his wife Connie Jones decided to meet this vital need for the hospital by giving $350,000 to Children’s to purchase the additional ECMO machine.

ECMO treatment is considered for infants, children and adolescents with a variety of illness and injuries, such as aspiration pneumonia; asthma; congenital diaphragmatic hernia; congenital heart disease – supportive treatment before or after cardiac surgery; meconium aspiration syndrome (MAS); myocarditis; near drowning; pulmonary hypertension; sepsis; severe pneumonia or sudden cardiac arrest. ECMO can be used for a period of days, or weeks, to give the child’s organs a chance to develop, heal and recover.

ECMO is available 24/7 and is operated by teams of highly trained critical care medical specialists in the NICU or PICU, depending on the age and diagnosis of the patient. These expert teams at Children’s are able to care for up to four patients simultaneously who require this intense, lifesaving therapy. Children’s is the only hospital outside of Atlanta in Georgia that provides ECMO therapy.

The team at the Children’s Hospital is also highly acclaimed, having earned the Gold Award for Excellence in Life Support from the Extracorporeal Life Support Organization (ELSO) consecutively since 2006. Another endorsement for the quality of care provided at Children’s Hospital of Georgia, U.S. News & World Report and Parents magazine recognize the ELSO Award as criteria for top pediatric hospitals.

“I don’t think people realize how blessed we are to have the Children’s Hospital in Augusta,” Jones said. “It’s such a wonderful asset, and we have got to help make it better known.”

This is one of the reasons that Jones serves on the Children’s Hospital Philanthropy Board and why he personally and professionally supports Children’s. Last summer the dealerships within the Gerald Jones Auto Group raised more than $50,000 for Children’s through a special “Buy a Car, Support Children’s Hospital” promotion.

“I’m always trying to encourage people to give to the Children’s Hospital,” said Jones, explaining that the ECMO gift was something he felt strongly about. “It’s hard for me to simply go ask somebody for money. But if I can go to them and say, ‘Hey, I ponied up personally, then it makes a huge difference.’”

As a not-for-profit, the Children’s Hospital still has many needs.

“What we are looking for are the big families that can give big. Hopefully, they will read about our gift, comment on it, and it will open the door for a conversation about another donation.”

Denise Parrish is Director of Communications for Philanthropy and Alumni Engagement at Augusta University. Contact her to schedule an interview on this topic at 706-721-9760 or mparrish@augusta.edu.