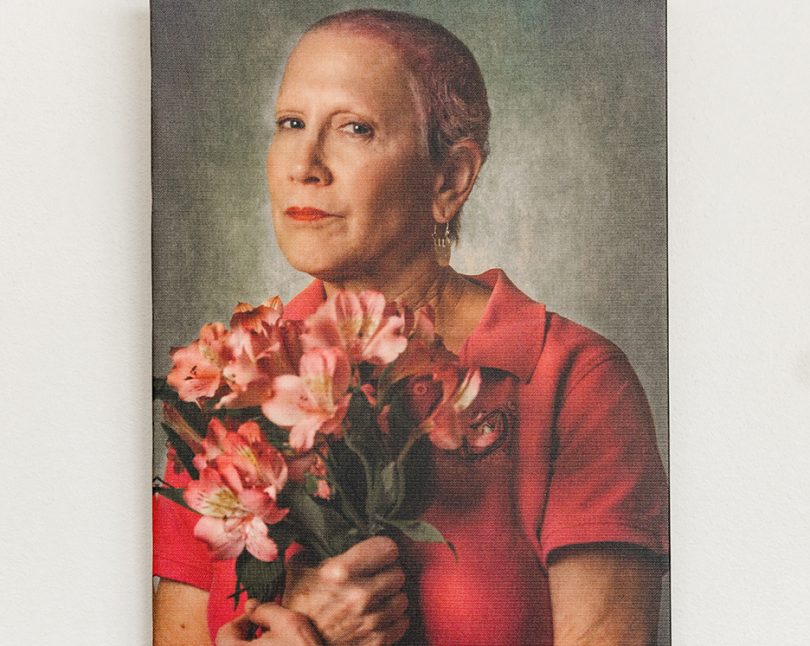 Walk past the bank of windows on the second floor of Augusta University Medical Center that overlooks Harper Street and you’ll find the Healing Arts Gallery Wall.

The wall is an initiative of Volunteer Services & Community Engagement to brighten the days of patients, visitors, and employees. It features different artists and subjects each month. October’s display is quite special, in recognition of Breast Cancer Awareness Month. Each photograph, taken by members of Chicks That Click photography club, features varying subjects in hues of pink.

Many of the pieces feature nature themes. However, on one end, a pink-shirted woman clutching a bouquet of pink flowers peers out at passersby. It is a self-portrait of two-time breast cancer survivor Marilyn Botta, titled “Hair at Last.”

The photograph is a celebration of each short strand of gray hair, some tinted pink – finally enough of them to cover her entire head following her last chemotherapy treatment in 2021.

“It grew around the sides, as if I was an older man. I had a fringe of hair and it would keep growing up the back,” she said. “It was very strange. It grew and finally it covered my whole head. It took four or five months. In that particular picture, it had actually covered the top of my head. I stopped wearing a wig because I actually had hair.”

This was Botta’s second bout with the disease. The first time she battled breast cancer, she was 34 and living in New Jersey while working in Manhattan. A lump she found under her arm during a shower was diagnosed as cancer. A lumpectomy and radiation fully removed the cancer, and for the next 34 years she was cancer-free.

Botta moved to Augusta shortly after 9/11. Her best friend since childhood lived in Augusta, and Botta happened to be visiting her when the World Trade Center was hit. Empire Blue Cross and Blue Shield – her employer – lost nine employees in the attack, which ultimately resulted in company downsizing. Botta decided to move to Augusta permanently.

Always an artist, she found the local, all-female photography club Chicks that Click, and began working and showcasing her art with them.

Then, in 2021, a suspicious mass, also in her right breast, was discovered on a routine mammogram.

“Obviously, this was not a recurrence. This was just a new cancer,” Botta said. “I had a mastectomy and because it was an aggressive tumor, I also had chemotherapy for about three-and-a-half months.”

She was successfully treated at a nearby oncology center and continues to do well. She walks or works out daily, leading the active lifestyle she’s always enjoyed. Botta said she believes that early detection is the factor that saved her from a more devastating diagnosis.

“The most important thing is early detection. Don’t wait. Get your mammograms,” she said.

Botta is not the only breast cancer survivor in the Chicks That Click group. Other artists on display have, if not battled the disease themselves, been touched by breast cancer in one way or another. The photographs have names like “Better Together,” “In Nature There is Strength,” and “And Like the Butterflies, Her Wings Unfurled.” Each tells a story as unique as the artists themselves.

Some of the pieces are also for sale. AU Health and Augusta University Volunteer Services receive a portion of the proceeds, which benefits Healing Arts programs like the arts wall, Art Play Studio and Music at Midday.